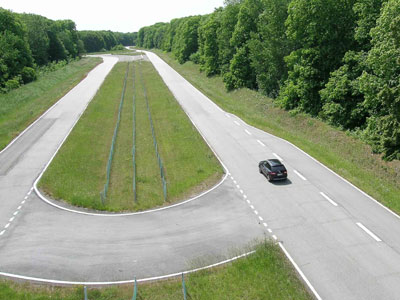 Dedicated to prototypes' bench tests, test drives and car adjustments, the Aubevoye technical centre is where Renault tortures its cars before putting them out on the road. The centre celebrated its 30th anniversary during an Open Doors day, last Saturday. Renault employees and their families had the chance to partake in various activities, meet the men and women who work their magic to conceive the perfect car, and get behind-the-scenes of this usually highly confidential centre. Indeed, Aubevoye, located about 100km North West of Paris is well hidden in the middle of forestry land in Normandy. When Renault bought the grounds back in 1981, this remote location was perfect, as it provided high levels of confidentiality to test out its latest prototypes. Rumour even has it that in 1985, a paparazzo called M. Lehman, was caught trying to snap spy shots of Renault prototypes, after camping in the centre's surrounding trees for days... 58 km of test tracks reproducing real-life driving experiences, 42 static test benches, all over the site's 613 ha (covering no less than 272 ha of woods), make for the reputation of this centre where Mercedes, Renault and Dacia cars are pushed to their limits all year long. The centre also plays a major role in testing Renault Z.E. cars. The same tests used on combustion engines are used on electric vehicles. The centre is composed of 32 tracks, split up between 3 confidential zones. The speed track, built in 1981, can be compared to an endless highway.  The city circuit (1995) reproduces traffic conditions of large cities and the wet track (1996) simulates poor roadholding conditions, from rain to black ice.

Overall, the families had a great time, got to test drive Renault cars, and learned everything they've always wanted to know about Aubevoye but were afraid to ask. A retired Renault employee explains how Renault conceived this Type A car, Renault's very first. "It could go up to 36 km/h...that is, when it wasn't windy."

A beautiful selection of Renault Classic cars, exhibited in one of the buildings. The Dynamic Renault Aubevoye Club (DRAC) demonstrated its "2-wheel driving" skills and invited guests on board. Our beautiful ZOE stole the show!