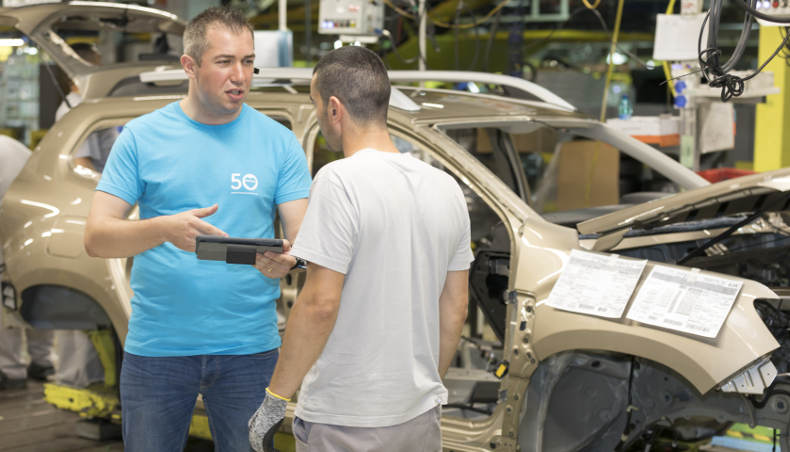 Dacia digital plant
The plant of the future entails the global digital transformation of a manufacturing site. It facilitates production by connecting people and processes. Digitalization fosters the dissemination of the right information to the right place at the right time, the aim being to increase customer satisfaction. As reflected in the work of Gabriel Tanasie, Head of a Connected Basic Work Unit at the Pitesti plant in Romania for a year and a half and connected just recently.
by Renault Group

The Pitesti plant has initiated the digitalization process and you are the head of a connected basic work unit (UET). What does digitalization involve?

The plant’s UET heads now use a digital tablet to supervise production. The digital technology makes communication easier between departments, but it also enables us to precisely monitor the production process of a vehicle in real time. It saves us considerable time and makes us more responsive. We can intervene as soon as a problem is detected and sort it out quickly. Using the camera on my tablet, I can explain a line problem in pictures. In short, digitalization makes decision-making easier right on the production line.

Has this digitalization process changed your management style?

It’s more my work approach that has changed. I now note down all my observations on my tablet, which speeds up dialogue with my teams. I send them all the alerts I receive on the production line in real time. It’s a real time-saver, which also has an impact on our team meetings. As we all have the same information, we can go straight to the essentials. The plant of the future is a real tool for progress for boosting the performance of the site and enhancing the flow of communication between employees. Do you have any special anecdotes?

Yes, I do. In April I was working on a project in the workshop and the plant director asked me a question. I was so absorbed by my project that I didn’t look up at the person asking me the question and I asked them to hold on a minute. Which this person did. When I looked up to talk to them, I saw that it was the director. You can imagine the state I was in. But the plant director never held it against me.

Find out more about the plant of the future