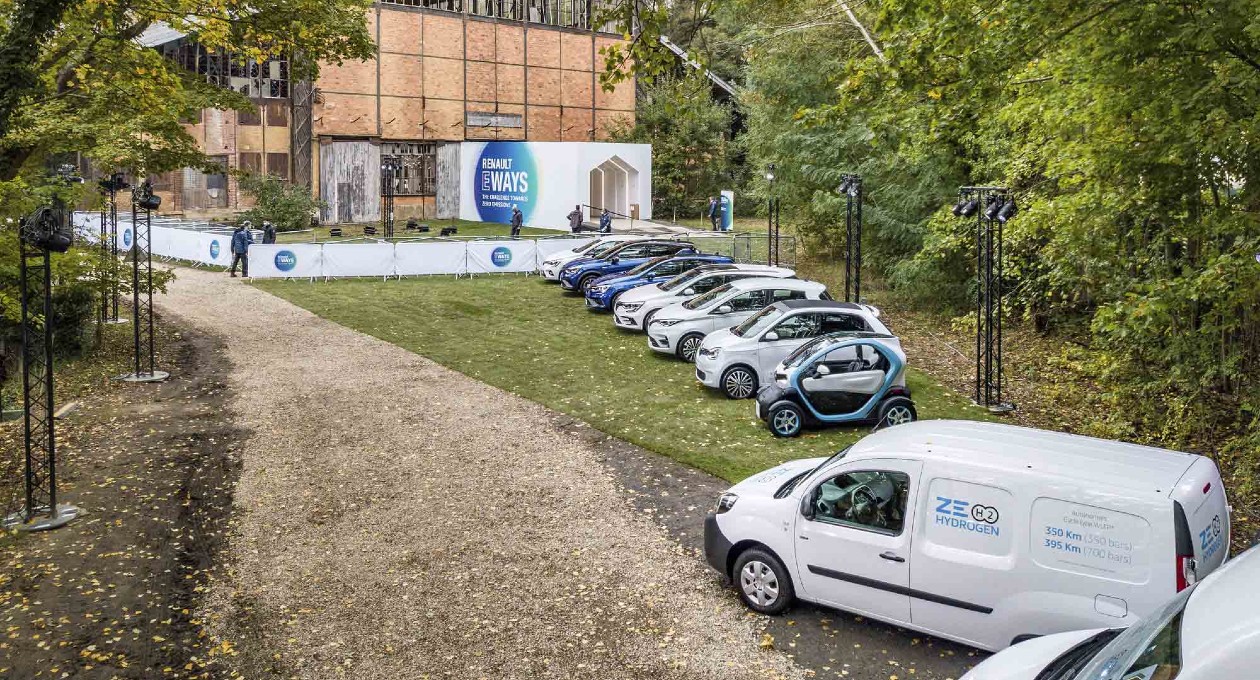 electric vehicle Hydrogen vehicle
In the global green movement away from vehicles powered by fossil fuels (gasoline or diesel) in favor of cleaner alternatives, many questions now revolve around electric cars vs. hydrogen cars. What’s the difference between the two? What are the advantages of each technology? And which is the power of the future?
by Renault Group

How do electric and hydrogen cars work?

In a comparison of electric cars vs. hydrogen cars, it is essential to first understand how each technology works.

In an electric car, instead of fuel combusting to provide energy to an engine, a lithium-ion battery is used to supply electricity to a motor, which then turns the wheels and powers other elements of the car. When depleted, instead of going to a gas station, an electric car is recharged by plugging into the electricity grid, much like with a telephone or computer.

A hydrogen car works differently, although it does also contain an electric motor. Inside a hydrogen-powered car, a fuel cell filled with hydrogen reacts with oxygen, resulting in the chemical production of electricity and water vapor. This electricity is then used to fuel the motor. To “refill” a hydrogen car, its hydrogen fuel cell needs to be topped up via pressurized tanks available at specific service stations. Both hydrogen-powered cars and electric vehicles are greener alternatives to those powered by fossil fuels. As far back as 1970, the chemist John Bockris recognized the potential of what he termed the “hydrogen economy”. But what about today? What makes some people convinced that hydrogen cars are the better solution in the long term?

The cost of hydrogen and infrastructure

When it comes to purchase price, a hydrogen-powered car currently costs on average 70,000 euros but refueling tariffs vary considerably on the country and state. Regardless of where you live, however, the cost of hydrogen is high: four times that of an electric vehicle in the US, as reported by Clean Technica. But this looks set to change. The cost of hydrogen fuel cells has dropped by more than 80 % over the last five years, according to Hydrogen Europe.

In Europe, large-scale projects for rolling out hydrogen power are being developed. A report from Hydrogen Mobility Europe predicts that “hydrogen infrastructure scales better than competing zero emission technologies, both in terms of infrastructure costs and logistics.” In other words, once hydrogen power is adopted into fleets, with the necessary infrastructure, it will then become truly accessible to individuals.

Other advantages of the hydrogen car are its fast refuel and its range. This explains why, in 2019, Renault announced that it was adding two new utility vehicles to its line: the Kangoo Z.E. Hydrogen and Master Z.E. Hydrogen. Both vehicles will be equipped with a range-extender fuel cell providing electric and thermal power of 10 kW, offering a range of over 350 kilometers – the best range in the electric van and small-van category – in only five to ten minutes. This short recharge duration and long range are major advantages of the hydrogen car, and what give it so much potential for company fleets. Electric cars vs. hydrogen-powered cars: electric in the lead today

As part of their environmental policies, certain authorities have announced future bans on the production of gasoline, diesel and hybrid vehicles, such as the UK, whose deadline has been moved forward from 2040 to 2035. France is even further in advance, with diesel cars banned in Paris from 2024. As of August 2019, some 13 European cities had announced upcoming bans on all combustion-powered vehicles over the decade to come. BloombergNEF predicts that electrified vehicles will account for 40% of demand in Germany by 2030. In the U.S., electric car sales are expected to reach 60% by 2040.

When it comes to electric cars vs. hydrogen-powered vehicles, for the time being the electric car is receiving the most international support. Governments worldwide are investing in the infrastructure required to roll out electric technology on a large-scale. Major cities like London and Paris are now familiar with electric charging stations, at highway rest stops, in shopping mall car parks, and along streets. Domestic outlets for charging electric vehicles are also increasingly common, with certain governments (the UK, for example) offering grants towards purchase and installation.

There’s no argument, electricity is currently considerably less expensive than hydrogen power, despite international price variations. Add to this the fact that, if you recharge your electric car during off-peak grid times, the cost is even lower, and it’s easy to see that, despite a higher upfront cost for the vehicle, an electric car is a financially astute long-term investment. Based on the electric car vs. hydrogen breakdown above, it might seem like the electric car is the outright winner. But not entirely. Hydrogen power, despite being the most abundant element on earth, and one of the “cleanest” fuels, is still in an early phase. But that isn’t to say that hydrogen cars don’t have a future.

Instead of focusing on electric cars vs. hydrogen, it might be more interesting to consider electric and hydrogen cars as part of a shared landscape. While the production of a lithium-ion battery uses large amounts of CO2, hydrogen production has the potential to be far less energy-intensive. And here is the key word: potential. With both hydrogen cars and electric vehicles less polluting than gasoline and diesel, all green evolutions are good news for the environment.

Hybrid technology: the solution for today?