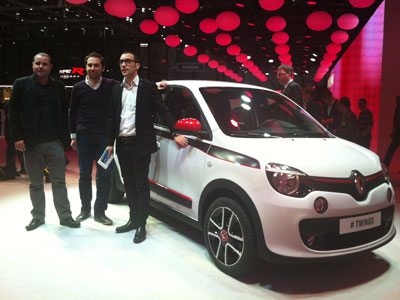 designers
New Twingo designers Csaba Wittinger (CW) and Raphaël Linari (RL) answered our questions at the Geneva Motor Show, where their "baby" made its international debut. They told us about wanting to design an iconic car, how designing a rear-engined car was a great opportunity, and working with the cool designers over at Daimler -who are working on the next Smart, developed on the same platform as New Twingo. Working on a car with so much heritage, on a segment close to Renault's heart, was quite a challenge. Here are their thoughts...
by Renault Group What was the design brief for Twingo ?

Was there any intention to reconnect with the design of Twingo 1 and get away from the Twingo 2 design?

RL: That wasn’t part of the brief. Even if Twingo 1 was a source of inspiration, the goal wasn’t to reproduce it.

CW: We didn’t want to go for retro design. We just wanted to use a few touches from Twingo 1 and the R5 Turbo. And I think Twingo 3 is a perfect mix of both

How did the car’s architecture (rear engine) influence its styling?

CW: Previous Renaults include the Renault 4CV and the R5 Turbo – a considerable heritage of rear-engine cars. A full 99% of the cars we design are front-wheel drive. So being able to work on a rear-engine car was really interesting!

RL: Actually, it was a fantastic opportunity.

CW: In design terms, it enabled us to place the four wheels firmly in the corners. Csaba Wittinger is originally from Hungary. He loves motor sports. He designed Twin'Run concept car, featuring a rear-engine architecture. Obviously, he was inspired by the R5 Turbo for New Twingo.

How was it working with the Daimler teams?

RL: The Twingo design project was launched between September 2009 and 2010. The angles and dimensions of the windscreen had already been set, to comply with new regulation on front passenger impact. We then had to decide what we would develop together, after which each team developed the design of its car (to fit to its brand image). The project went very smoothly in terms of design. It’s clear that designers often look for the same things anyway: a car as low to the ground as possible with the biggest possible wheels placed in the four corners of the car. The fact that the designers at Daimler are really great people obviously helped. We knew each other from before too. Raphaël Linari is a specialist of small city cars. He designed ZOE Z.E. Concept and concept-car Twin'Z (in collaboration with Ross Lovegrove).

What would you say to people who say New Twingo looks like the Fiat 500?

RL: I have no worries on that score. Once people see New Twingo on the road, those doubts will disappear. The front end was pre-determined in response to new legislation, so it’s quite logical in this segment to see similar windscreen angles.

CW: To be honest, no-one at the Design Center ever had the slightest concern. At no point did we think we were doing something similar to the Fiat 500. For us it looked more like an R5 Turbo. The angle of its rear screen was entirely inspired by the R5 Turbo’s.

RL: Ultimately, our biggest doubt concerned these heritage issues. It borrowed touches from the R5 and touches from Twingo 1, so our question was: will this Twingo find its place, its identity? And for us that answer is yes. It really has the Twingo spirit. Obviously, given new legislation and today’s new proportions, we could never make another Twingo 1.

When should we expect the sports model?

RL : We don’t know yet, but there’s a real expectation for it.