Inauguration of new Alpine A110 production line in Dieppe 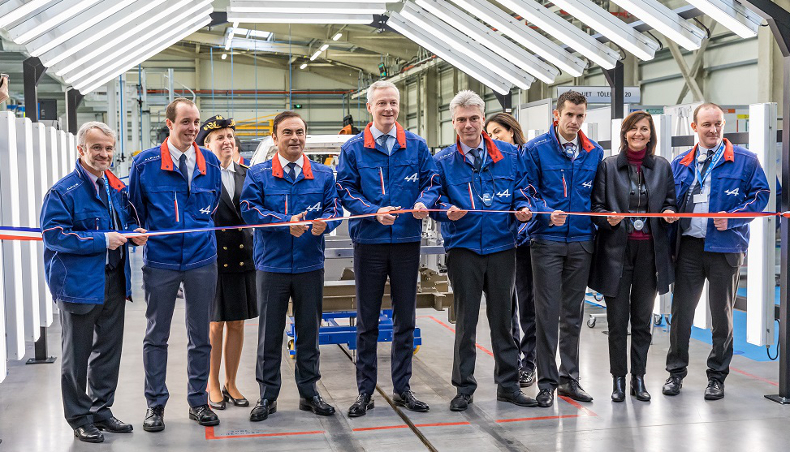 Manufacturing
“You are not making a car, but a legend”. Bruno Le Maire, Minister of Economy and Finance, and Carlos Ghosn, Chairman and CEO of Renault, were in Dieppe on December 14 to inaugurate the new production line of the Alpine A110. A milestone for the teams, whose passion and know-how have been widely praised; and an event that marks the success of an icon’s rebirth, allowing the Dieppe plant to benefit
by Emmanuel GENTY

This is one of the most important milestones of the end of 2017 for Dieppe’s Alpine plant. The inauguration of the production line of the new Alpine A110 is the symbol of a triple success: that of the rebirth of a legendary vehicle, of the transformation of a mythical factory, now equipped with a top-of-the-range industrial tool unique in Europe, and of the recruitment of more than 150 new talents to take the Alpine myth to the next level. It must be said that history started almost half a century ago, in 1969, the year this factory opened.

“For 50 years now, between these walls, women and men have shared the siprit of motorsport, passing on the know-how of small-scale production: small volumes, lots of passion.”
Carlos Ghosn, Chairman and CEO of Renault

Descending from an iconic model, the new Alpine A110 had to remain faithful to its roots and history. The one that has made her the symbol of French excellence and elegance. Now with new know-how and current technologies - thanks to the resources of the Alliance, the world's largest automaker.

“You are not making a car, but a legend, it's totally different!”
Bruno Le Maire, Minister of Economy and Finance

Meeting this challenge, required investment. Thanks to the support of the State, the Normandy region and the agglomeration, Groupe Renault contributed more than 35 million euros in 4 years to the Alpine brand’s birthplace.

« As you have been able to see during the visit, the factory now has two new workshops, one devoted to sheet metal work and the other to the premium finish. We have equipped ourselves with new production systems with gluing and riveting robots to assemble the Alpine’s 100% aluminum bodywork. This is a unique process in the world.”
Carlos Ghosn

There are benefits, of course, in terms of employment. The Alpine’s rebirth in Dieppe has allowed Renault to recruit and train men and women from the area:

“Here, you are proving a simple fact: French industry has a future. France is a major industrial nation and industry mean jobs!”
Bruno Le Maire

The journalists test drives of the new Alpine A110 Première Edition (1 955 copies, 58 500 euros) are currently taking place and the brand has just revealed two new soon marketed trim levels for the “berlinette”: Pure and Legend. They will be presented at the Geneva Motor Show in March 2018. The brand also unveiled at the end of October the Alpine A110 Cup, which will evolve on the European circuits as part of the Alpine Europa Cup.

The spirit of conquest is present more than ever.

"Today we are ready. The first models will soon be released. Last December, even though the new Alpine A110 hadn't been unveiled, the first 1,955 pre-sale copies were reserved in just a few days in eleven countries around the world."
Carlos Ghosn

The Refactory in Flins launches its Open Innovation Hub

Everything there is to know about hydrogen vehicles