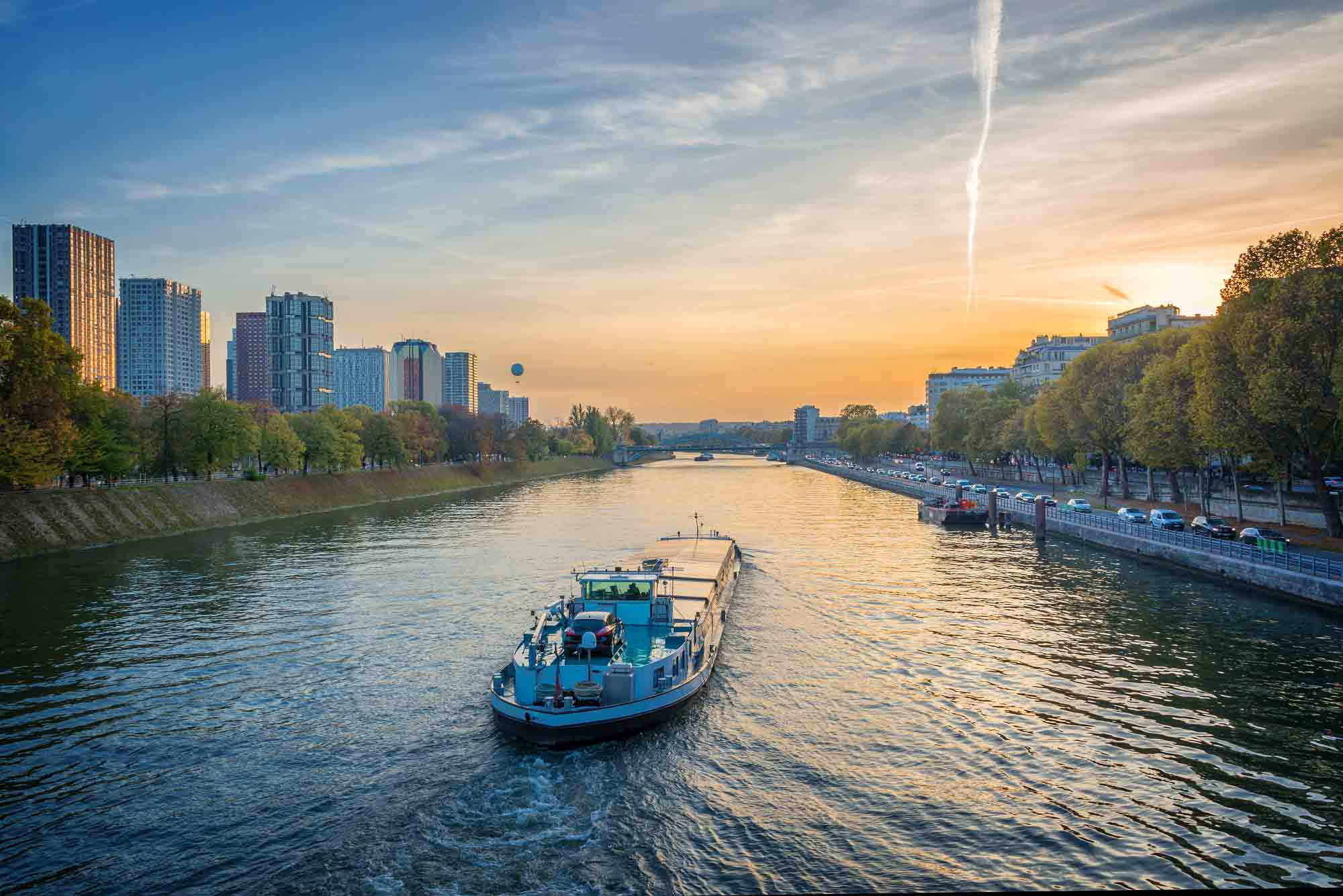 Battery environment mobility mobilize Videos
When we talk about electric transport, we often think about cars, maybe bicycles, or perhaps kick scooters, but rarely about boats. Nevertheless, river transport is undergoing some major changes, and could well be part of the evolution of mobility into a more sustainable model. So where do things stand today?
by Renault Group

From reducing overcrowding on roads to minimizing greenhouse gas emissions and decreasing energy consumption, river transport is seeing a real resurgence of interest, for both urban mobility and the transport of merchandise. It offers numerous economic and ecological advantages. Waterway transport allows for the transportation of larger, heavier loads than other types of freight transport. It is also more reliable in terms of timing – there being no risk of getting stuck in traffic – safer, and often cheaper. Another advantage of waterway transport is that it consumes 3 to 4 times less energy than a truck for the same amount of merchandise and produces up to 5 times less CO2 than other modes of transport. It also decreases overcrowding on roads: a 4,400 ton river vessel can replace up to 220 20-ton trucks on the roads and causes less noise pollution.
When combined with the additional advantages of electric propulsion, we end up with a zero-emissions method of transport* that creates no vibrations, odors, or noise, and which could play a major role when it comes to the transition of mobility towards more ecological methods.

Due to their increasing populations, cities are having to deal with increased circulation of people and goods, which leads to rises in traffic and pollution. If shared electric mobility systems involving cars, bicycles, and scooters are already being developed in numerous cities, what could they look like on our waterways? Today, several cities, such as London and Paris, already have shuttles operating on their rivers. The first step would be to convert them to electric power. But there is also room for more innovative projects, such as SeaBubbles, electric boats also known as hydrofoils, which could navigate on our waterways and offer taxi services on rivers in major cities. Tests have already been conducted in Paris and Lyon, France.

A new way of looking at urban delivery services

When it comes to innovation, the urban delivery industry has not been resting on its laurels. In Paris, again, the Fludis is an electric warehouse/boat that delivers to businesses and individuals. Merchandise (packages and palettes) is loaded at the Gennevilliers port, then orders are prepared during the journey, and finally delivered by electric-powered cargo bikes that can transport up to 250 kg of merchandise. Each “agency” of this new service that was launched this fall has a long-term goal of delivering 750,000 packages per year, thus replacing 300,000 kilometers of road travel, and eliminating 110 tons of CO2 emissions.

It may seem surprising, but the future of electric-powered boats may well be linked to that of electric cars. How so? Thanks to the circular economy of the battery. After being used in cars, batteries are given a second lease on life. In Paris, the first 100% electric boat powered by this technology should soon be seen floating down the river Seine. The “Black Swan” is the result of a collaboration between Seine Alliance, Groupe Renault, and the Green Vision integrator. It is powered by batteries from Renault vehicles that have been reconfigured for the energy needs of a boat providing two-hour cruises through the heart of Paris, thus offering passengers a unique experience on a boat that is silent, odorless, and without any vibrations. After use in vehicles, the batteries’ residual capacity is around 60 to 75% of their initial capacity. That is more than enough for a maximum speed of 12 km/h on the French river. This technology could be used for restaurant boats, which generally move slowly for short periods of time and could be charged when docked, between outings.

The future of electric mobility on rivers

To get a clearer idea of the future, we can look to the Netherlands, known for their extensive network of canals, and two projects in particular.

The PortLiner company is preparing two different electric barges models for the future. The larger one, the EC110, is 110 meters long, 11.45 meters wide, and can contain up to 280 20-foot containers. It can hold 8% more than its combustion-powered counterpart, as the electric machinery takes up less space. The batteries themselves are stored in shipping containers and offer an autonomy of over thirty hours.

Around one quarter of the surface area of Amsterdam is water. Its canals offer a real opportunity to make the city’s streets less crowded. This is the idea behind the “Roboat”, a five-year collaborative project led by the Amsterdam Institute for Advanced Metropolitan Solutions and the Massachusetts Institute of Technology, which began in 2016. Roboat is a fleet of autonomous boats designed for different purposes: from the transportation of people and goods, to household waste collection, the measurement of water quality and so on. Even more impressive, these boats are designed to fit together, becoming temporary structures such as floating bridges for pedestrians or even performance structures.