Seguin island: a pavilion to tell the story of Renault 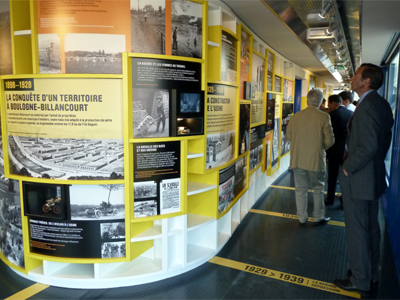 history
On September 10, Pierre-Christophe Baguet, Mayor of Boulogne-Billancourt, and Mouna Sepehri, Executive Vice President, Office of the CEO, opened the Seguin Island Pavilion. Visitors to the new information and exhibition centre will be able to trace Renault's history at this key site in French manufacturing.
by Renault Group Seguin Island’s history has been closely interwoven with that of Renault since Louis Renault bought the site in 1919. After initially planning to construct gardens and leisure areas for his employees, he gradually developed the idea of building a factory there. Opened in 1929 and fully completed in 1937, it covered almost all the island’s 11.5 hectares.

This is where Renault produced such legendary vehicles as the Vivaquatre, 4CV and Renault 4. In the 1970s, about 10,000 people worked at the “steamship factory”. After being a window on French employment, a cosmopolitan centre and a source of inspiration for artists like photographer Robert Doisneau, the plant closed in 1992. Even today, it can still stir vivid memories in all those who worked there. This is the story told at the Pavilion, which opened to the public on September 12. Inside, a timeline presentation put together by former Renault employees’ organisations (AMETIS, ATRIS and SHGR) will outline the company’s history. Outside, a display window will feature one of the brand’s legendary models – a Renault 4 is currently in the spotlight.

Talks may be organised at the Pavilion on such topics as the history of Renault and the automobile, as well as industrial and social history. It may also be used for film screenings and meetings on specific themes.

How to get there: