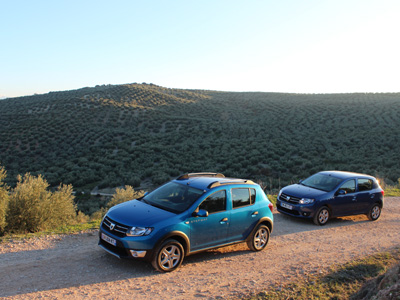 Dacia Sandero and Sandero Stepway have, like Logan, been completely restyled for the end of 2012. Following the Paris Motor Show reveal in September, we recently got a closer look at the strengths of Sandero, the Dacia city car. During our test drive, the car supplied conclusive proof that you can get more bang for your buck, in the shape of refreshed aesthetics, reworked ergonomics, and new engines and technology. This is the first restyle for New Dacia Logan, Sandero and Sandero Stepway. The three models now feature the same “face”, which serves to underline their brand kinship, as does the fact that Sandero shares nearly 80% of its parts with Logan, for extra economies of scale. All 3 cars get a more assertive look with Dacia’s new visual identity and a harmonious front end showcasing the Dacia logo on the grille. The rear lights have also been redesigned, while the waist line looks more sculptural, the wheel arches more emphatic and the wings more scalloped. New Dacia identity on (from left to right) : Sandero, Sandero Stepway, and Logan

The proportion of body to glass reinforces the feeling of robustness, further underscoring Dacia’s brand identity. Perceived quality is better than ever inside. The dashboard features chrome detailing and a central console that can house the Media Nav multimedia touch screen. Controls are more functional and accessible, including for the air conditioning and electric side mirror controls. New upholstery choices are also available.

Sandero is available with an optional Media Nav GPS system, seen on Lodgy and Dokker. Users can browse the new system via the 7-inch screen and switch between the radio, GPS and Bluetooth hands-free phone functions. They can also hook up their MP3 players via USB/jack sockets and listen to their favorite tunes using steering wheel-mounted or touch-screen controls. During our test, Media Nav seemed highly functional and the menus worked intuitively. Listed at just €240, it would be a shame to pass on this system. In a first for Dacia range, an optional speed limiter is available. All three models – Logan, Sandero and Sandero Stepway – come with rear parking assist, depending on trim level.

More comfortable and quiet on the road

New-generation Logan and Sandero are now equipped with power steering from the first trim level for the Euro 5 engines. The perfectly-weighted system makes Sandero even more pleasant to drive. Sandero is lively and agile on the road, with firm roadholding and well-adjusted suspension. Extensive work has gone into soundproofing: new cowl to keep separate the engine, noise absorption, and the addition of an airtightness joint along the whole passenger compartment. This was confirmed in our test drive, with engine noise barely perceptible in the cabin. Wind noise, though still audible, has been considerably reduced. This last was a weak point on the previous generation Sandero.

The big change under the hood is the arrival of the TCe 90 engine, already fitted on New Clio in an Energy version (fitted with Stop and Start and regenerative braking system). The three-cylinder turbo supplies plenty of torque at low engine speeds, with 90% of the total (135 Nm) coming at 1,650 rpm.

Powering the lighter-weight bodies, the powertrain is a solid performer and during our test consumed under 6 l/100 km.

Diesel-wise, the 1.5 dCi engine, in a 66 kW version (90 bhp) was tested on Sandero Stepway. The powerplant compensates with spritely acceleration (thanks to extra torque of 220 Nm at 1,750 rpm) and turns out to be a pleasure to drive, with fuel consumption of just 5 l/100 km.

Both engines are mated to a 5-speed manual gearbox. Sandero Stepway : now and then.

So, what do you think?