As winner of the first-ever Manufacturers’ WRC title back in 1973, and in addition to its involvement in Formula 1 and endurance racing, Alpine is acutely aware of its rallying roots. Today, the Alpine A110 R-GT has emerged as a proven winner that is ideal for privateers thanks to its inherent dynamic qualities, boosted by specific development work at the hands of French driver Manu Guigou and the fitment by Signatech of driver-aid technologies. We look back at the 2022 season, which notably saw Frenchman Raphaël Astier claim the FIA R-GT Cup.

There are ideas you simply can’t ignore once they have crept into your mind and Signatech-Alpine’s hunch to prepare a version of the A110 for rallying is a case in point. After the introduction of the Cup and GT4 derivatives that enable amateurs to enjoy the model’s inherent dynamic qualities around circuits, the development of a rally version was only a matter of time. 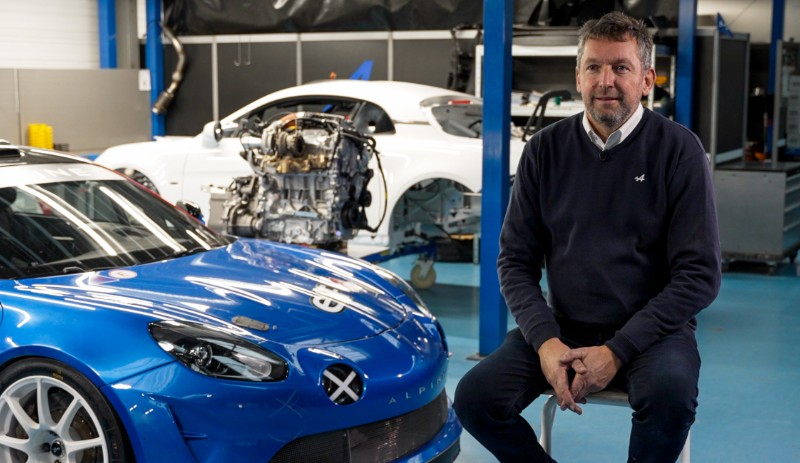 On the victory trail!

Their success inevitably rekindled memories of the celebrated A110 Berlinette’s record on the world’s biggest rallies of the late 1960s and early 1970s. “That era left an indelible mark on a generation of fans and was constantly at the back of my mind when we started to work on the Alpine R-GT project,” says Lionel Chevalier, Signatech-Alpine’s Technical Director. “I wanted to be worthy of what my predecessors had achieved, and they had set the bar very high. So that was additional pressure.”

It has to be said that the A110 road car’s basic characteristics meant it had every chance of following in the successful footsteps of its illustrious elder. “The Berlinette was famous for its light weight and agility which were the result of its fibreglass bodyshell,” recalls the French engineer. “The modern A110 boasts the same qualities, but due to other features, like its aluminium chassis.”

From the outside, only the presence of a rear spoiler sets the R-GT apart from the road car. “Making the rally car visually different to the production model was a conscious choice. At the same time, however, changes under the body were necessary to upgrade the car’s rigidity. Rally cars compete on roads, but they can stray off them at times, when drivers choose to cut a corner, for example. Similarly, circuit racing doesn’t have the compressions that are part and parcel of rallying. We consequently needed to work on the car’s rigidity but taking into account its aluminium chassis which you can’t weld things to.” 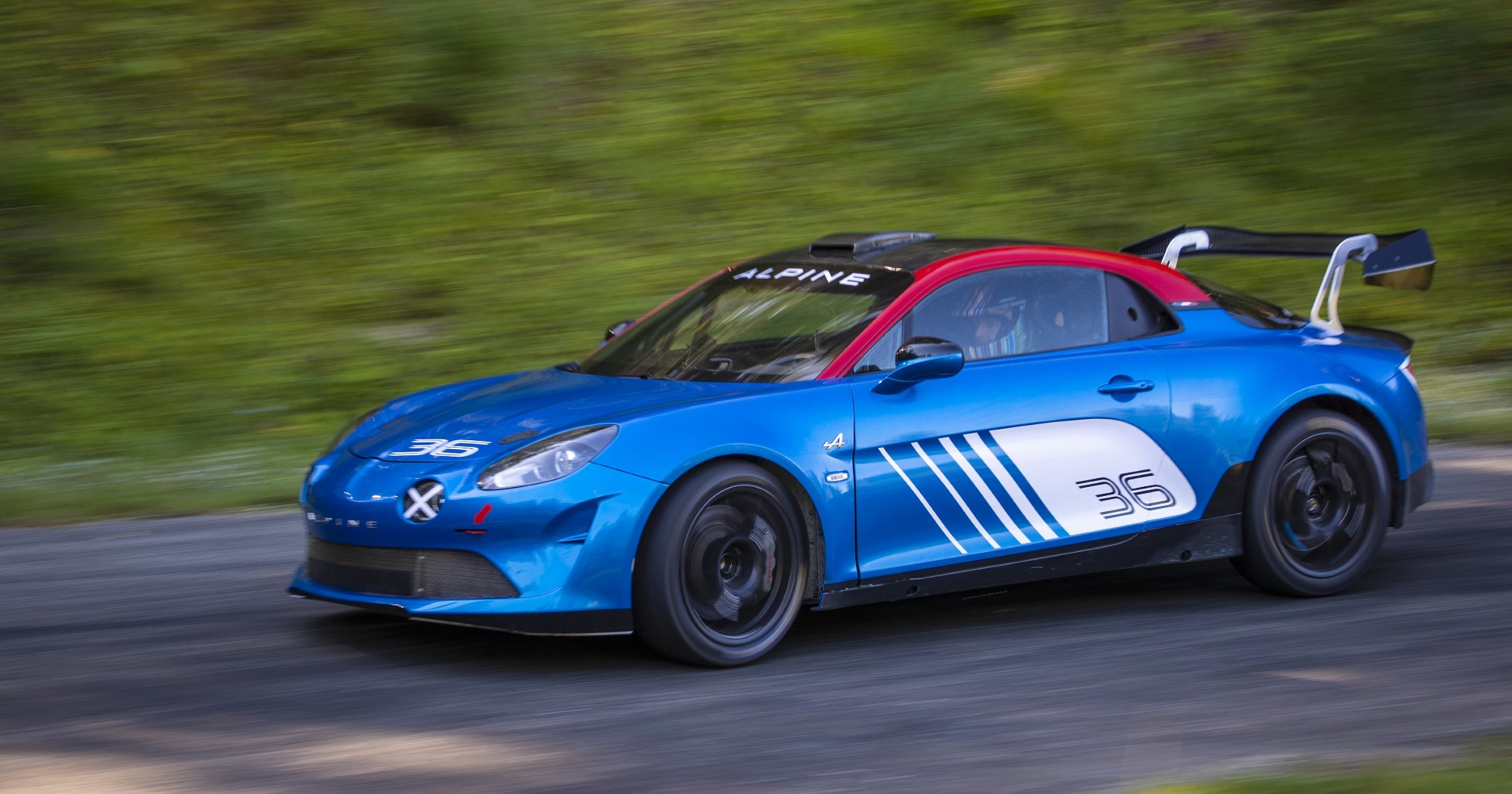 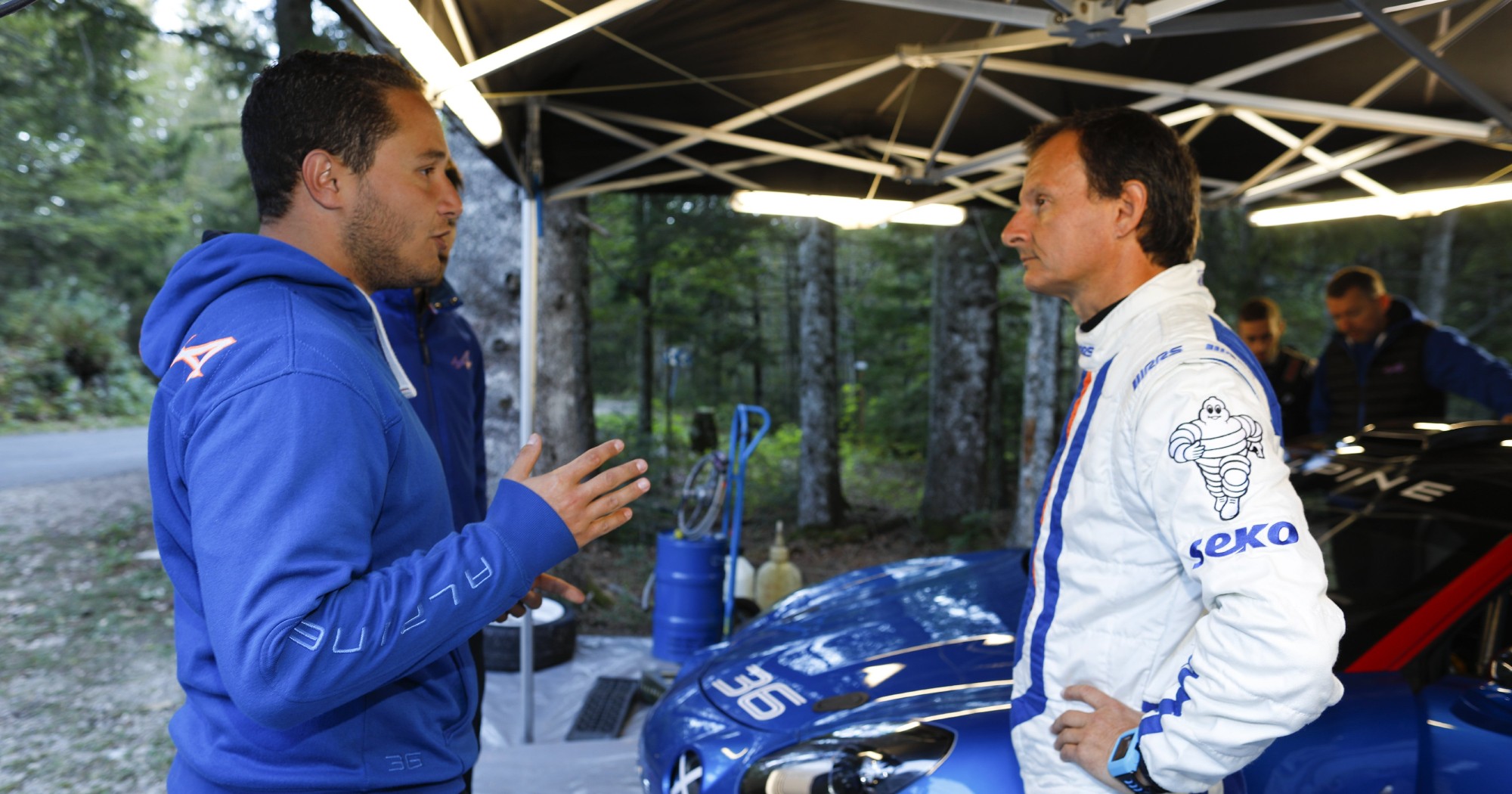 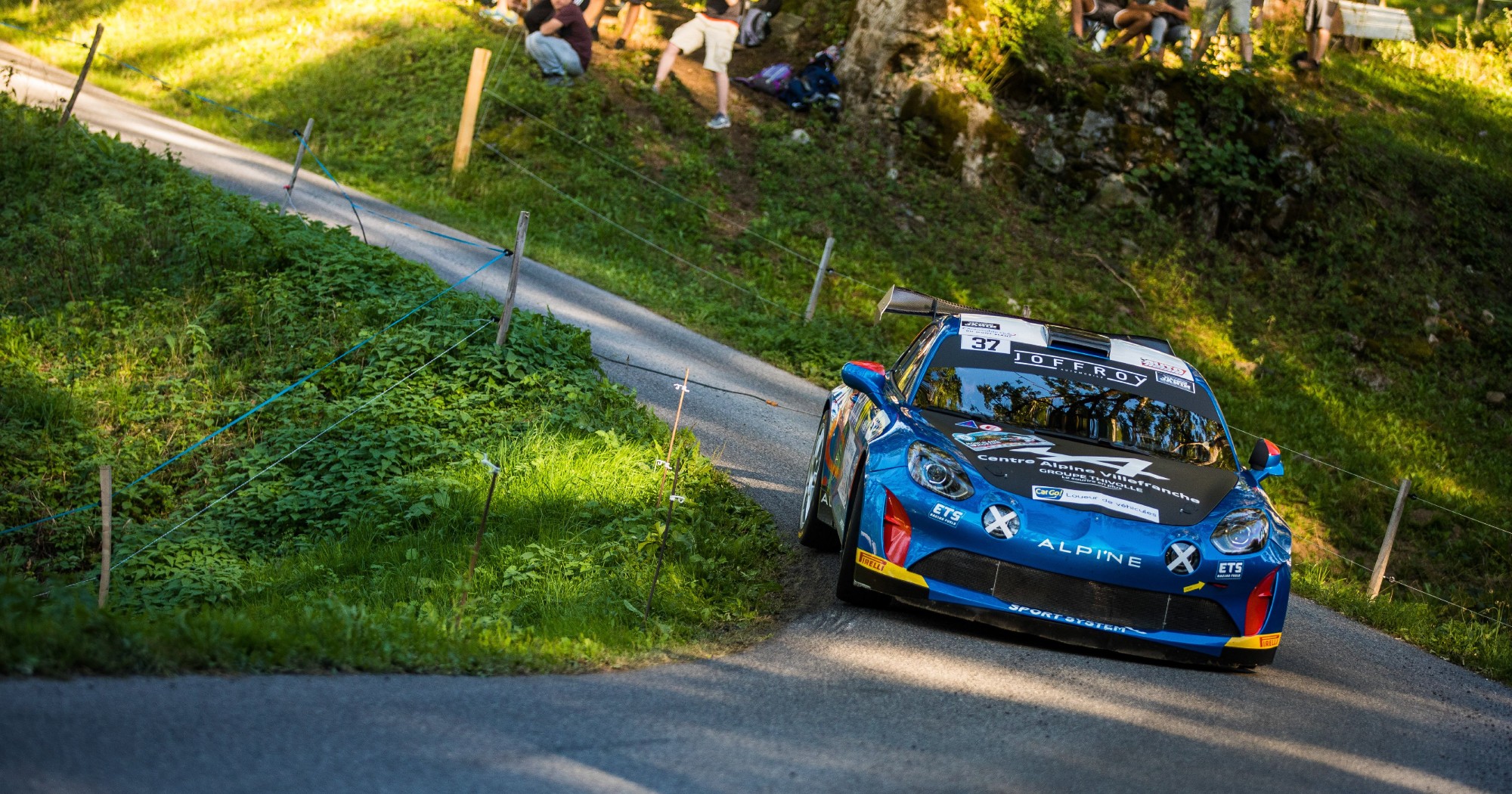 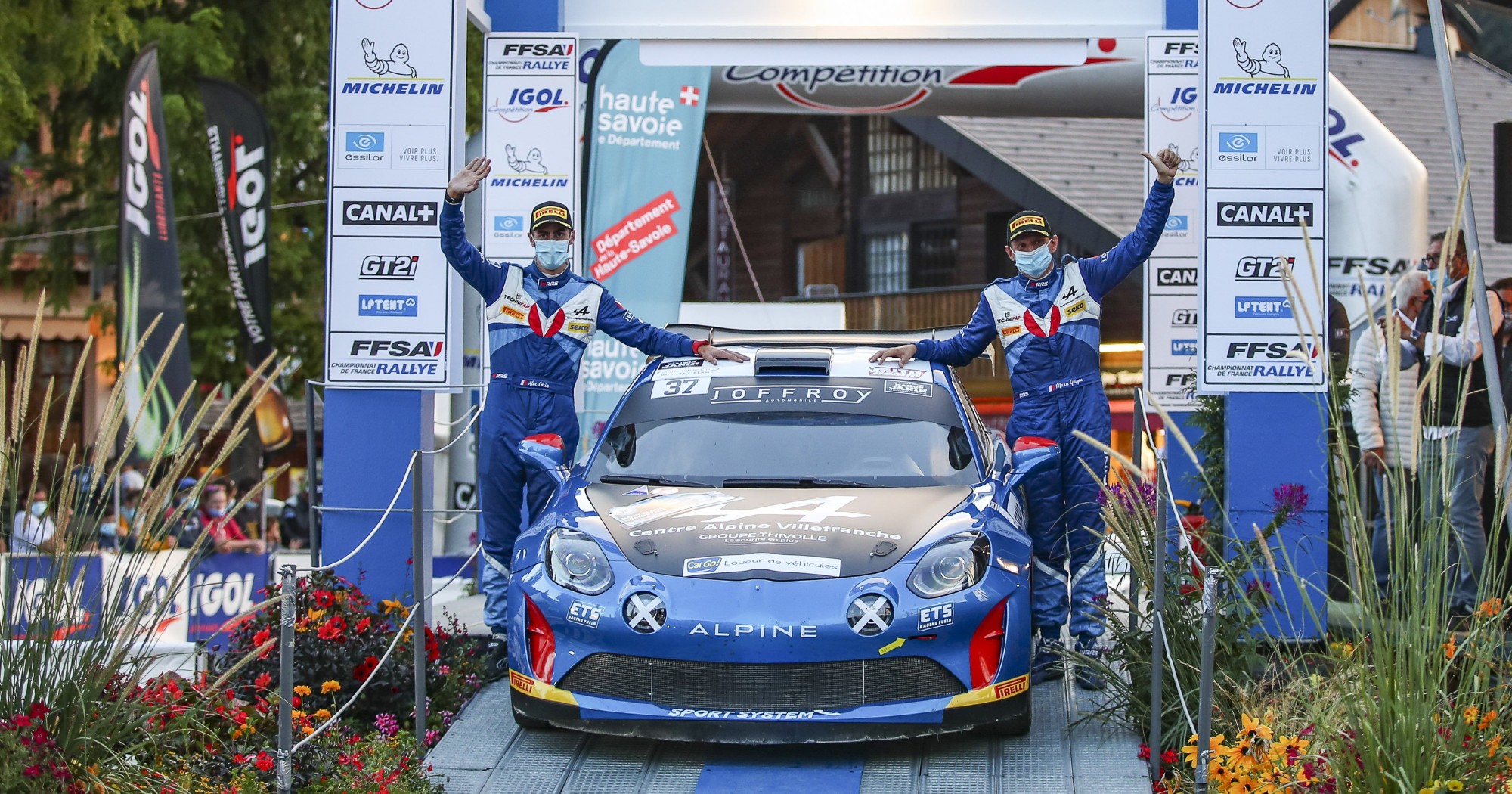 Given that the R-GT is aimed at privateers of differing levels of experience, particular attention was paid to making sure it was affordable. “To this end, we fitted a traction control system, which is especially an asset for a two-wheel drive car. Depending on the setting, it facilitates the transmission of the available power to the ground. We also innovated by incorporating an ABS system developed especially for motorsport in association with our partner Bosch. It helps drivers to feel confident because they don’t have to worry about the front wheels locking under braking, irrespective of how much grip there is. Both of these functions are easy to adjust via the steering wheel which is derived from the world of racing.”

Cédric Robert and the A110 R-GT: France’s 2022 two-wheel drive champions

Even experienced campaigners like Manu Guigou (winner of the French Rally Championship’s two-wheel drive class in 2020) and Cédric Robert (winner of the same title in 2022) ended up being won over by these aids. “The first time I drove the R-GT,” recalls the latter, “I wanted to show that I was experienced enough to do without the ABS and traction control. I believed they would hamper the car’s performance. But I couldn’t have been more wrong! Data showed that my wheels were still spinning at 203kph! When I got back to service, they reconnected both systems. In fact, they really don’t prevent you from drifting or controlling the car as you want. As a result, different levels of driver can enjoy this car, from gentleman drivers to more experienced competitors.”

Competing as amateur, with backing from his friends, the former WRC driver had a faultless run in the car in 2022: “Matthieu [Duval] and I won every round of the R-GT we contested. Not only that, but we also had the pleasure of posting fastest times, ahead of all the four-wheel drive cars, like at the Rallye Lyon-Charbonnières. We finished on the overall podium several times, too. Claiming the title after the last stage of the Critérium des Cévennes was an especially memorable moment.”

The Alpine A110 R-GT reaped success on the international scene, as well, winning the FIA R-GT Cup which was based on five European rallies. A year after former Alpine LMP2 endurance-racing driver Pierre Ragues discovered the car, it was the turn of amateur Raphaël Astier to fly the brand’s colours high and proud on the world stage. “My first outing in the Alpine A110 R-GT was the 2021 Rallye Monte-Carlo,” he recalls. “It was a tremendous experience, and I went on to take part in – and win – another event. There was therefore no doubt in my mind about which car I wanted to drive in 2022! My priority at the start of the season was the Monte-Carlo and we won the R-GT class. After that, my partners encouraged me to contest the FIA Cup’s other rounds.”

After coming second at the Rally Islas Canarias and winning the Rally di Roma Capitale, Raphaël Astier had a chance to wrap up the series at the Barum Rally in the Czech Republic. “The conditions weren’t easy, but everything went perfectly. We won that event and also the series! It was great to add another international title to Alpine’s record!”

In addition to showcasing the Alpine A110 R-GT’s potential, the results achieved by Cédric Robert and Raphaël Astier in 2022 position the car as a true successor to the Berlinette, winner of the 1973 Rallye Monte-Carlo, the opening round of the newly-created World Rally Championship and the first step on the road to claiming the inaugural Manufacturers’ crown the same year, almost half-a-century ago…

Dacia Sandero: the secrets of its success

Sixty Renault 5 and thousands of memories: a meeting of AIR-5 enthusiasts