Renault preparing infrastructures for the connected car of the future, with SCOOP 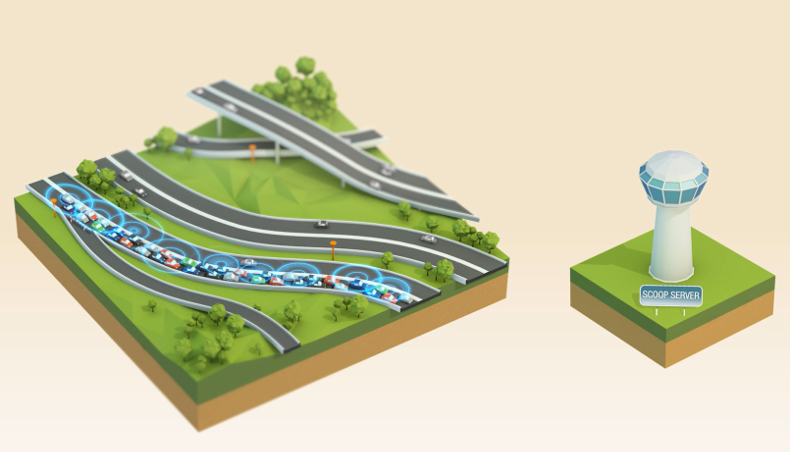 In 2017 the SCOOP project will be going ahead with wide-scale rollout of 3,000 cars testing tomorrow’s V2V (vehicle-to-vehicle) and V2X (vehicle-to-infrastructure) connectivity under real-life traffic conditions. True to its innovative stance on connection-capable road transport, Groupe Renault is providing a fleet of a thousand Méganes on this exciting European project, which has private- and public-sector backing.
by Thomas AUDEBERT

What is the SCOOP project?

SCOOP is a pilot project on cooperative intelligent transport systems (ITS), run in partnership with a broad span of organizations in France: the French Environment Ministry, local government bodies, infrastructure management authorities, universities, and research centres.

The SCOOP project (for Systems COOPerative) involves setting up a channel of communication between vehicles and between vehicles and roadway infrastructures: cars communicate with each other and with the roadway, to receive and issue warnings on dangers, slow-downs, accidents, etc., the main objectives being to heighten road safety and ease traffic congestion.

In one direction, vehicles send information to the roadway and to other connected vehicles, on dangers and difficulties encountered, and this works without the intermediary of a telecom operator. In the other direction, the roadways send connected vehicles information on traffic conditions, roadworks, speed limits, accidents, obstacles, etc.,” explains Christine Tissot, head of the SCOOP@F project for Renault and expert in transport information and communication technologies. How does it work?

In-car sensors and controllers input and analyse data such as vehicle speed, steering-wheel angle, tyre grip, windscreen-wiper activation and airbag triggering. The results of the analysis are indicative of traffic conditions and possibly hazardous situations such as ice, obstacles or accidents. If a problem is detected, the vehicle’s onboard communication system sends out a warning message to other connected vehicles in the vicinity, using a communication protocol via a WiFi-like radio link that is specially engineered for use with moving vehicles and has a range of up to around 1,000 metres.

Warning messages will be picked up either directly by other vehicles or by stationary communication units along the roadway, which in turn can send signals to vehicles and to a SCOOP server that centralizes information and updates it in realtime.

For example, when a vehicle approaches an accident site it sends out a warning signal that will be received by the cars behind it. These in turn will relay the message, meaning cars some distance away will also be alerted. In addition, the warning signal will also be picked up by a stationary unit in the vicinity of any of these cars, and this unit will automatically notify the central system, which will call out the emergency services accordingly.
A similar procedure will be triggered for any number of potentially hazardous incidents such as animals on the road, temporary roadworks, traffic jams, landslides, etc.

What’s been done so far?

The SCOOP project started in 2014 and is now entering its wide-scale experimentation phase. A total of 3,000 vehicles (including 1,000 specially-equipped Méganes from the Palencia production facility in Spain) will very shortly be taking to the road along some 2,000 kilometres of highways in five French regions (Paris region, A4 motorway, Isère, Bordeaux bypass and Brittany), specially equipped with stationary communication units.
As Ms Tissot notes,

This experimentation campaign, which will be running through to the end of 2018, will be substantiating the advantages that this kind of technology has to offer, in terms of road safety, and helping us optimize the system as a whole prior to full-scale rollout”.

Why is Renault taking part in the SCOOP project?

Groupe Renault has been involved in this project from the outset, because road safety improvement is one of its priorities. The project also squares neatly with the way Renault sees the autonomous and connected car of the future. Connection capability will be a key feature of a global ecosystem that extends to the car, its environment and of course, the driver and passengers. It will also be one of the technological building blocks of tomorrow’s autonomous vehicle. And by easing traffic congestion it will also help bring down pollution emissions and fuel and energy consumption.