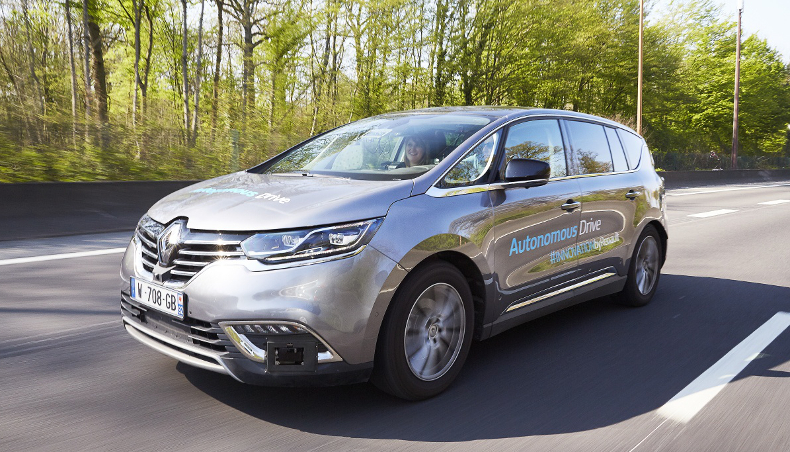 There’s finally an end in sight to the tedium of those interminable motorway journeys, and bumper-to-bumper jams. Renault is gathering momentum in the step-by-step endeavour that starts with advanced driver assistance systems, followed by autonomous drive and ultimately eyes-off/hands -off mode.
by Morgan Poulanges

Renault is well on the way to developing autonomous driving capabilities for its production models. The first vehicles with this kind of function are expected in the next few years. By 2020 we’ll be seeing single-lane control, which keeps the vehicle in-lane at a safe distance from the car in front on motorways. Thereafter Renault will be one of the first volume automakers to phase-in Eyes-off/Hands-off technology on mass-market vehicles.

Eyes-off/Hands-off technology brings in an autonomous drive mode that requires no supervision from the driver. During autonomous drive phases, drivers can take their eyes off the road and their hands off the wheel: the vehicle drives itself. This function will be viable during the most tedious journey phases, such as traffic jams, on highway stretches where this mode is authorized.

How does Eyes-off/Hands-off technology work?

With autonomous drive operative, the car “sees” the road and monitors what’s happening all around the car by means of an extensive array of sensors. On current prototypes (based on Renault Espace) we find the following sensors:

The data input from the sensors is processed by multiple onboard “brains” in the form of embedded software that tells the car what to do, thus enabling the driver to safely hand the car over to its automatic driver, in Eyes-off/Hands-off mode.

To ensure the required safety of autonomous drive in Eyes-off/Hands-off mode, the steering and braking control systems are doubled up, as are all the related electrics. So in the event of a flaw in one of the two parallel systems, the other takes over to ensure the vehicle keeps full control of its trajectory and automatically ensures safe driving conditions, in the event of the driver not resuming control.

What are the advantages of Eyes-off/Hands-off mode?

With autonomous drive in Eyes off/Hands off mode, Renault is seeking to offer a new motoring experience, safer, more pleasant and more varied. The risk of accident will be greatly reduced. Journeys will be less stressful and more productive. Drivers will be able to optimize their in-car time, using in-car connectivity, for example, to answer emails or watch videos, assuming outside conditions present no impediment to this being done in total safety and that legislation changes in phase with these new technologies to authorize the new motoring practices.

The wealth of data and experience yielded by autonomous drive tests carried out over the past few years brings precious insights into how drivers respond to these new systems, along with valuable pointers on driver acceptance and understanding of system functions.

Test fleets of Renault Eyes-off/Hands-off autonomous vehicles will be on the road in 2018, with implementation on production models following after 2020, as permitted by legislation at that point in time.