Renault Twingo and Smart: a unique partnership setting a reference for shared architecture 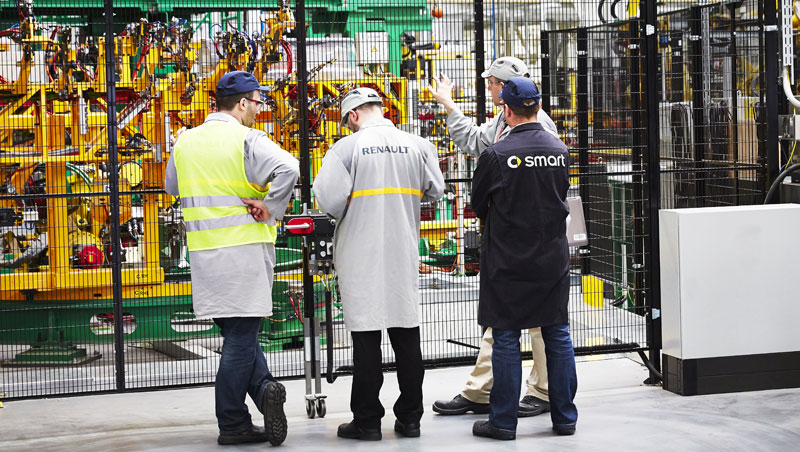 Manufacturing New Twingo plant
Ever wondered how two competing car manufacturers could collaborate? Especially two companies with two completely different cultures? We met up with Renault's Kassai and Smart's Winkler at the Geneva Motor Show a few months ago, and here is what they had to say about their partnership and how they worked together to develop a common architecture for New Twingo & New Smart (fortwo & forfour).
by Renault Group Why DID DAIMLER & RENAULT work together on Twingo & Smart? (© Yannick Brossard)
Kassai: Renault has always been a pioneer in the small cars segment. And Smart's concept is quite unique: a rear engine and a maximum length of 2.70m. With new regulations announced for 2015 in the compact car segment, it seemed natural to come together in this partnership as we'll all have to adapt.
Winkler: In the A segment, it would not have been possible to offer so many unique features to our customers without a cooperation and we are very happy that we partnered up with Renault. Also because we are a pretty much French-oriented company! The Smart fortwo is being produced in Hambach, Lorraine, since its very first days, and Smart was invented in Switzerland, a partialy French-speaking country! This partnership is 1+1=3: our two companies came up with three very nice, very different cars.

Kassai: Our team had to "think modular" to deliver three cars while keeping the differentiation between the two brands. A modular architecture means that the cars' underbody have the same front and same rear, but the middle part is shortened on the Smart two-seater. We invested €450 million in our Novo Mesto plant to welcome New Twingo and Smart Forfour, mainly in the paint and body shop departments.

Winkler: And on top of the Smart investments in Novo Mesto, we invested about  €200 million into Hambach. Kassai: The specifications were simple and customer-oriented. Roominess inside and the best turning radius. In Renault's case, the look of Twingo 1 was also a strong point.
Winkler: We are very proud of the brand identity we could transfer into the new Smart models, as we managed to have a very good commonality, but at the same time, about 95% of the parts you can see are differentiated between Smart and Renault. To reach this goal, we always looked at who had the best expertise in which area and used the best practices. New Renault Twingo at Aubevoye Technical Centre (© Luc Perenom)
Kassai: The challenge wasn't commonality or differentiation, but to find the balance between the 2. First, our design teams worked side by side, to make sure they'd come up with different looks for the cars. Then in the second phase, the teams worked together to develop the cars.The two companies have strong cultures that go beyond the simple fact they are French and German. As said, we took the best processes from each company and decided to use the one, the other, or to create our own way of doing things. It was challenging, we ended up working in 3 different languages. World premiere of the new smart fortwo and forfour in Berlin: Daimler CEO Dr. Dieter Zetsche and Head of smart Dr Annette Winkler (© Daimler)
Winkler: We invested in a very strong culture, in a close cooperation and good relationship between everyone involved in the project. And  now we're very proud of the results!