The United Kingdom and Ireland welcome the Dacia brand 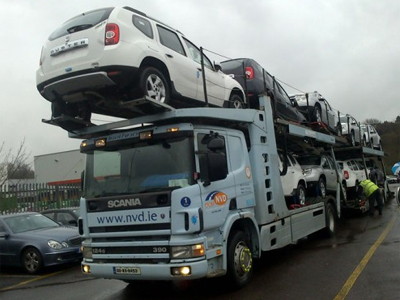 Dacia duster sandero
Dacia showrooms officially opened their doors in the United Kingdom and Ireland a few days ago. They are selling two flagship models in the Dacia range: Duster, the vehicle that symbolises the brand, and New Sandero, which was launched more recently.
by Renault Group

Dacia announced at the Goodwood Festival of Speed on June 28 last year that the brand would be launched in the United Kingdom in January 2013. To attract customers ahead of the official date, a major communication campaign was introduced in the second half of 2012, focusing on Duster with the opening of preorders online at the Dacia Store UK website (www.dacia.co.uk). It was a successful operation since 2,000 orders were placed.

"What I thought was exceptional was that we took so many orders from customers who had neither seen nor test-driven the vehicle", says François Grandjeat, marketing and sales manager for the G4 countries (Germany, Italy, Spain and the United Kingdom).  So the idea of using online sales as the spearhead of a brand launch proved highly successful. In addition to online orders through Dacia Store, the brand has set up a dealer network of 134 outlets and trained 450 people to sell the vehicles and aftersales products. The first cars with right-hand drive, made at the Chennai plant in India and the Pitesti plant in Romania, have already arrived for delivery to the pioneer customers. The range is due to be extended from the second half of 2013, with the showrooms putting New Sandero Stepway on display alongside Duster and New Sandero.

All the elements seem to be in place for Dacia to achieve success on the other side of the Channel. Initial feedback from the media and public has been enthusiastic. Blind tests carried out by British journalists from the trade press weekly Auto Express – asking people at a shopping centre what they thought of a New Sandero with no logo or brand name – elicited a very positive response.

In Ireland, the sales launch has also just begun with 450 orders taken and a similarly enthusiastic response from the media.