The table below contains key figures on the Renault group by year, as published. For previous years and restated figures, an Excel file is also available.

(1) In thousand units. Group sales include LADA from 2016, Jinbei & Huasong from 2018.
(2) On April 9, 2020, The Board of Directors has decided to no longer propose the distribution of a 2019 dividend at the Annual General Meeting to be held on June 12,2020.
(3) Data for Automotive excluding AVTOVAZ
(4) From 2016, Net cash position and Shareholders' equity include AVTOVAZ
(5) From 2017, AVTOVAZ is consolidated within Renault Group
(6) Shareholder's equity at December 31, 2018 has been adjusted by an amount of -€57 million due to correction of an error concerning operations in the Americas Region, with a corresponding entry in provisions for risks on taxes other than income taxes.

Monthly sales for the Renault group.

(1) From 2017, AVTOVAZ is consolidated within Renault Group 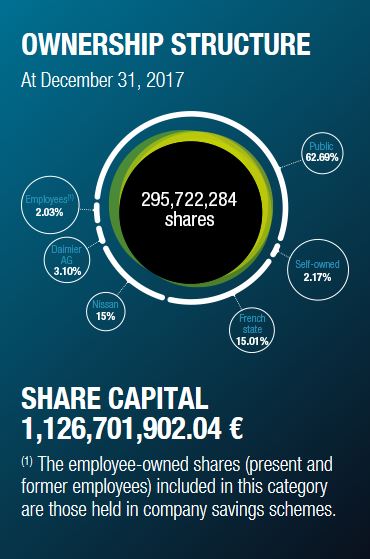 No significant changes occurred in the Renault group’s stockholder structure in 2014. Treasury stock: These shares do not carry voting rights.

Latest major change in capital structure: on July 28, 2003 the French State further reduced its interest. Following the sale, it holds less than 16% of Renault’s share capital. Capital ownership remained stable in 2005. The French government's stake was reduced from 15.65% to 15.33% after it issued bonus shares on September 20, 2005 to current and former employees who subscribed to the 2002 offer. Treasury stock: These shares do not carry voting rights. In H1 2002, two major transactions substantially altered the ownership structure: Nissan took a 15% stake and the French State sold part of its holding through a private institutional placement. Renault makes an initial offering of 28.1% of its capital stock.

All of Renault commercial statistics