All there is to know about the hydrogen-powered car 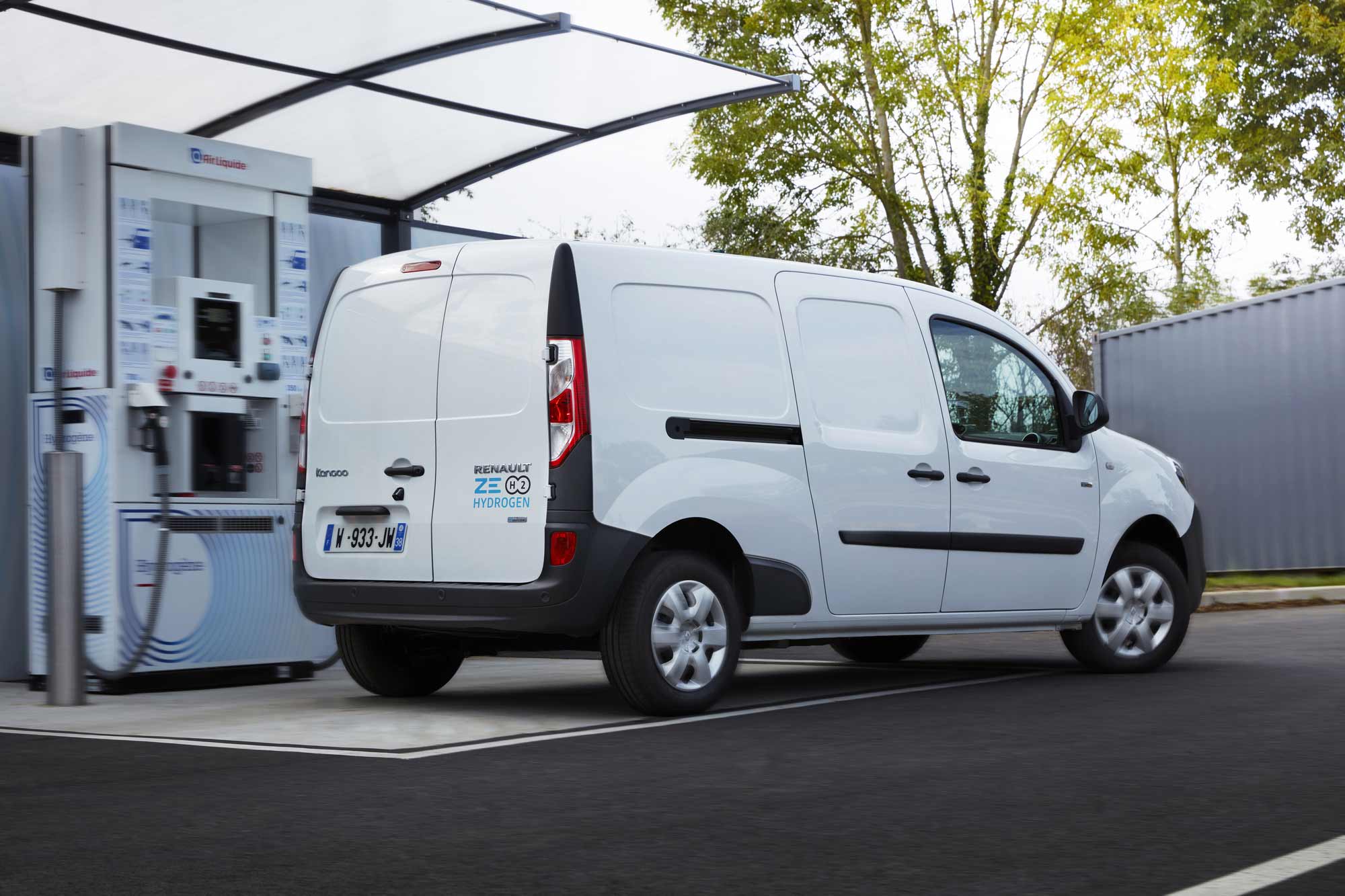 Hydrogen vehicle
The hydrogen car, powered by a fuel cell, is already a commercial reality for Renault, the only manufacturer on the market to offer French hydrogen vehicles. With its numerous qualities, this technology is complementary to “classic” electric vehicles. Here we explain what a hydrogen-powered car is, and how exactly it works!
by Renault Group

What is a hydrogen-powered car?

The hydrogen fuel cell is a relatively old technology, as its first applications date back to 1804. At the time, the Swiss inventor François Isaac-de-Rivaz built the first cell using what was known as “coal gas”, considered the ancestor of the hydrogen used today.

The modern hydrogen-powered car is an electric car. The difference between an electric-battery-powered car (lithium-ion, for example) is that, here, electricity is produced by a generator using dihydrogen (H2). This system, called a “fuel cell”, makes use of the chemical reaction between hydrogen and oxygen to produce electricity and send it to the motor. The hydrogen car therefore needs to be equipped with a secure pressurized gas reservoir. How does a fuel cell work?

The fuel cell of a hydrogen-powered car is quite a complex component which acts as an electrochemical generator.
At the heart of the cell, the hydrogen from the reservoir recombines with the oxygen from incoming air, generating electricity to power the motor. This chemical reaction emits only water vapor. This lack of emissions harmful to the environment and public health when running makes the hydrogen-powered vehicle just as interesting as the “classic” electric car*.

Filling up on hydrogen is just as quick and easy as refueling with gasoline. Simply connect the nozzle of the hydrogen gas terminal to the vehicle, engage the pump, and wait a few minutes. A few kilos of hydrogen are enough to refill the hydrogen cell and drive for several hundred kilometers. With public hydrogen supply structures as yet thin on the European ground, most fuel-cell-powered cars belong to company fleets with their own hydrogen stations. Based on this observation, Renault offers Kangoo Z.E. Hydrogen and Master Z.E. Hydrogen, as well as their classic electric versions.

Where does hydrogen come from?

There is a large quantity of hydrogen available in its natural state. Today, its use is limited to a few industrial sectors with high added value (metalworks, refineries, textiles, glass, electronics etc.). As a fuel, it is used in space shuttle propulsion, as its energy performance is very high (one kilo of dihydrogen contains three times more energy than a kilo of gasoline.)
However, with hydrogen’s overall use remaining low, little investment has been put into its production. These days it is produced through “steam reforming” from coal or oil. A green hydrogen procedure is also being developed based on renewable energy sources such as water electrolysis from wind and solar power electricity… as well as nuclear energy.

Hydrogen car vs. Electric car: what are the differences?

While the hydrogen-powered car is first and foremost an electric car, it nevertheless differs fundamentally from the more classic electric vehicles. The motor’s power source is not the same: traditional electric cars use a battery which must be plugged in to recharge — to provide energy to the electric motor; whereas the hydrogen-powered car uses a fuel cell to produce the necessary electricity. But it is possible to combine the two solutions. This is the option chosen by Renault for its Kangoo Z.E. Hydrogen and Master Z.E. Hydrogen: they remain powered by the battery, and the hydrogen cell enables the vehicle to recharge while driving. This therefore increases the range.

Advantages of a hydrogen cell compared to an electric car

The first advantage of an electric car with a hydrogen fuel cell compared to a battery-powered electric vehicle is found in its range and refueling speed at a hydrogen gas terminal. The handful of hydrogen cars on the market offer up to three times more range than their electric counterparts, with 350-600 kilometers of range on a “full tank”, while an equivalent electric car provides 120-400 kilometers with a fully-charged battery.
Its second asset is its charging time. The hydrogen-powered car is particularly suitable for saving time during recharging breaks on long trips thanks to hydrogen’s refill speed. 5-10 minutes are enough to completely fill a hydrogen fuel cell from a terminal, while a battery requires at least half an hour to charge up to 80%.

Disadvantages of a hydrogen fuel cell compared to an electric car

While electric charging terminals, especially high-powered ones, become more and more common in Europe, hydrogen stations remain relatively rare. Even though the network is growing every year, there are currently less than 200 hydrogen gas stations in Europe. In the UK, there are currently no more than 17, and in France only around 40 stations are listed, with a hundred existing construction projects, while Germany has 87 stations. The world leader, Japan, counted 114 stations at the close of 2019.
What’s more, the complex technology of the hydrogen fuel cell makes a hydrogen-powered car around 50% more expensive than its electric equivalent.

What’s the future for the hydrogen-powered car?

The hydrogen-powered car is of interest to most automotive manufacturers due to its obvious advantages. Reliable, clean to run*, and with a large range, the number of vehicles using hydrogen is therefore set to increase over the next decade. Just as for the “classic” electric car and its developing charging infrastructure, the growth of the hydrogen gas station network will constitute one of the key factors in its successful roll-out on a large scale: an essential condition for making this technology more affordable than it is today.

How much does a hydrogen car cost to buy?

Still as yet produced in limited series, these days a hydrogen-powered car remains relatively expensive to buy. Private vehicles on the market are sold for 70,000 euro and above. Renault Kangoo Z.E. Hydrogen, the only commercialized compact van with a fuel cell, however, is available starting from 48,300 euro (excluding taxes) in France.

What grants are available for the purchase of a hydrogen-powered car?

In the United Kingdom, grants can reach up to 6,720 euro. In France, hydrogen-powered cars and light utility vehicles can receive the same state-sponsored grants as electric-battery-powered cars. The ecology bonus for individuals can be as much as 7,000 euros, or 5,000 euro for professionals. A sum of 3,000 euro is also granted above the ceiling of 60,000 euro imposed on other electric vehicles.
On top of this ecological bonus, in France a “conversion grant” is offered for the destruction of an old polluting vehicle, which can reach up to 10,000 euro under certain conditions. Several regional and local initiatives also provide extra grants which can reach up to 12,000 euro!
In Germany, 2020, the purchaser of an electric car can take advantage of a 50% reduction in VAT and a scrapping grant of up to 6,000 euro. Italy, Spain and other European countries are expected to follow suit this summer.

To find out more, follow the conference dedicated to hydrogen-powered vehicles during Renault eWays 2020.

*Neither atmospheric emissions of CO2 nor pollutants while driving, in accordance with the WLTP standard cycle, excluding wear parts.