How does a hydrogen vehicle work? 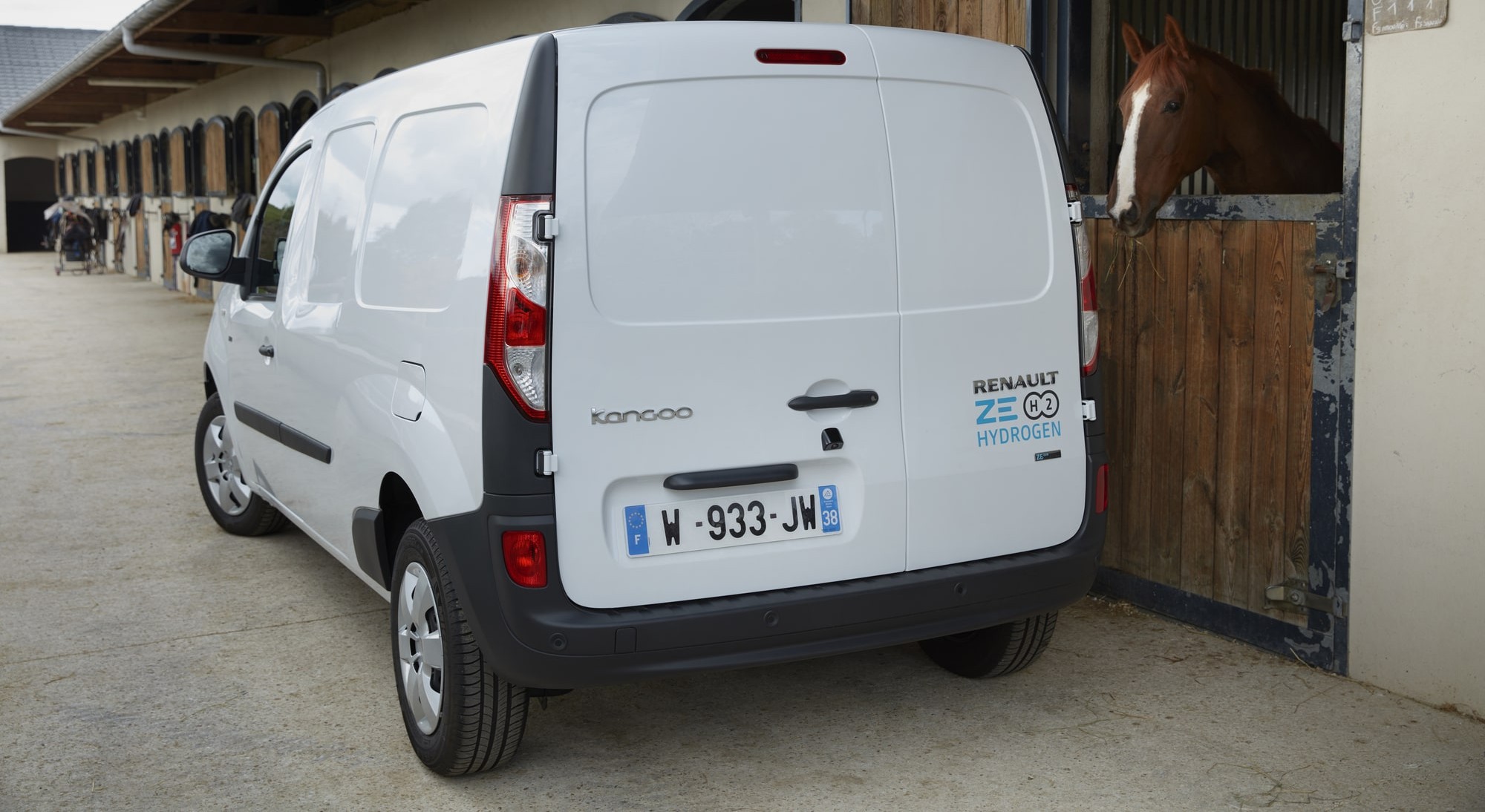 Hydrogen vehicle
Among the various technologies to which the future of the automobile is turning, the hydrogen fuel cell car is already a reality. This technology was introduced on a vehicle from the Renault utility range — Kangoo Z.E. Hydrogen — for the first time in 2014. Hydrogen is changing the game in electric mobility, both in terms of challenges and possibilities. Here are some explanations to better understand this famous chemical element.
by Renault Group

While, for many, the term “fuel cell” might sound like complex advanced technology, the secret to this new way of producing energy lies in a simple chemical reaction between oxygen and hydrogen. So what are the particularities of a hydrogen vehicle? How does it work? What are its advantages? And, more concretely, what are the possible uses of a hydrogen car in everyday life?

The challenges of the hydrogen electric car

We’ll begin with some context. The term “hydrogen electric car” refers to a vehicle powered by a specific energy source — hydrogen — using a special device: the fuel cell. The hydrogen fuel cell vehicle belongs to the large family of electric cars, as it gets its traction from an electric powertrain. For an electric car powered by a lithium-ion battery, electrical energy is simply stored in the battery after charging on the electrical grid. Herein lies the difference with the hydrogen vehicle. The electricity required to run the powertrain is not only supplied by the battery, but also by the fuel cell using hydrogen stored onboard the vehicle. The majority of hydrogen vehicles currently produced by automobile manufacturers work in this way.

The hydrogen-powered car shares the same emission-free driving ambitions as the “conventional” electric vehicle. That said, there still remain several challenges to overcome in order to reduce the environmental impact of hydrogen production as much as possible. The current method of extracting this chemical element relies on the steam reforming of hydrocarbons, and is called “grey” hydrogen because it is extracted from fossil fuels.
But there is another way to obtain hydrogen: through water electrolysis. Where the electricity used in the electrolysis process is from a sustainable energy source, like solar or wind power, it is possible to produce “green” hydrogen. This extraction method is a solution for the future.

How the hydrogen electric vehicle works using a fuel cell

How does the hydrogen fuel cell vehicle work in practice? Its electric energy is supplied by a fuel cell. Pressurized hydrogen is stored in special tanks onboard the vehicle. The gas (H2), along with dioxygen (O2) from the surrounding air, are supplied to the fuel cell. These two gases then undergo an electrochemical reaction inside the cell, in turn producing electricity, heat and water vapor (H2O), which is released in the form of a gas via a small tube located underneath the vehicle.

The resulting energy produced, as well as energy from the battery, power the car’s electric motor, which is then able to run silently and with zero pollutant or CO2emissions*. When it comes to replenishing the hydrogen, fueling takes place at dedicated stations using pumps that inject hydrogen, extremely quickly, into the vehicle’s tank in the form of pressurized gas.

The energy consumption of a hydrogen fuel cell vehicle

How much does a hydrogen fuel cell electric vehicle consume? Bear in mind that the hydrogen atom, two of which are required to make up the dihydrogen (H2) molecule, is one of the simplest and lightest natural elements on the periodic table (the classification which lists all the chemical elements present on Earth.) It has very low volume density. So, in order to obtain the quantity of hydrogen needed to power a vehicle, it is necessary to store a considerable amount in large tanks at high pressure.

The hydrogen fuel cell electric vehicle according to Renault Group

In this operational diagram of the Kangoo Z.E. Hydrogen, the motor of the hydrogen-powered electric car is powered by its lithium-ion battery. As for the fuel cell, it provides an additional energy reserve that increases the range of the car (providing more autonomy and shorter charging time.) Hydrogen-powered vehicles provide the driver with the practical and financial advantages of electric power, plus the benefits offered by hydrogen in terms of flexibility and range.

The advantages of the hydrogen-powered car

Behind the wheel of a hydrogen-powered vehicle, the driver benefits above all from almost double the range. As part of the complementary relationship between the fuel cell and the lithium-ion battery, the electricity produced by the fuel cell using the stored hydrogen is added to the storage capacity of its main battery. For example, Renault’s Kangoo Z.E. Hydrogen is equipped with a 30 kWh battery coupled with an onboard hydrogen storage capacity equivalent to 29.7 kWh. Its range therefore increases from 230 kilometers to 370 kilometers (WLTP* cycle). In this way, the hydrogen system can be seen as a “range extender”.
The icing on the cake is the refueling speed. As well as recharging on the grid, a maximum of ten minutes are enough to refill the hydrogen tank in order to supply the fuel cell — instantly increasing the vehicle’s range.
And these aren’t the only advantages: the hydrogen-powered vehicle offers all the benefits of driving an electric vehicle, starting with the lack of engine noise, enjoyable driving experience, and access to restricted driving zones in certain city centers.

How exactly is a hydrogen fuel cell electric vehicle recharged? The answer differs between manufacturers. At Renault, there are two ways of restoring the vehicle’s energy reserves. Firstly, recharging from a standard electric terminal to supply the lithium-ion battery (an option facilitated by the number of accessible charging stations.) Secondly, refueling at a hydrogen station to refill the gas tank takes just a few minutes — during the day, for example, when the driver needs to extend their trip.

While the term “fuel cell car” has not yet entered into our everyday language, it shouldn’t evoke concern when it comes to safety. Of course, hydrogen, highly-pressurized in its tank, is a volatile and flammable element. In case the fuel cell overheats or is removed, the hydrogen is dispersed and released in less than a minute. Before going into circulation, hydrogen cars must adhere to particularly strict European regulations. Kangoo Z.E. Hydrogen is subject to a European certification issued in accordance with the EC regulation n°79/2009.
For over twenty years, technologies that use dihydrogen have been tested and approved on numerous occasions, often under extreme conditions (space engineering, submarines, construction machinery).
Today, thanks to the experience accumulated from the pioneering Kangoo Z.E. Hydrogen since 2014, Renault Group is going even further, announcing a partnership with the renowned world leader in fuel cells, Plug Power, who have rolled out over 40,000 fuel cell systems to date. The resulting Innovation Center will not only place its partners at the cutting edge of research and development, manufacturing, and the commercialization of hydrogen vehicles, but also at the forefront of related services (charging infrastructures, hydrogen supply, etc.)

While these two technologies give the impression of being diametrically opposed, they are actually complementary mobility modes. The question “hydrogen or electric car?” depends above all on the use and type of vehicle. On a light utility vehicle with a high payload capacity, hydrogen is particularly interesting. Even though the tank used to store the gas is large, its weight remains reasonable. Hydrogen is especially suited to intensive closed-loop use where refueling is easily locatable and accessible on the vehicle’s route, or even directly on company premises.
Electric vehicles equipped only with lithium-ion batteries are intended for all types of driver and use, from short trips around town to longer journeys. But when the battery is empty, the only solution is to recharge on the electricity grid. The electric-only vehicle takes longer to charge than its hydrogen counterpart, but there are more charging stations available, both in private and public locations. Parking can be easily combined with charging the vehicle. Both electric and hydrogen are therefore complementary technologies designed to provide sustainable mobility suitable for all types of use.

How established are hydrogen vehicles in Europe?

In 2020, new registrations of hydrogen fuel cell vehicles occurred mostly in Germany, followed by the Netherlands and France**. Hydrogen refueling stations are expanding progressively throughout Europe. In 2020, for example, there are around 100 stations in France, with the objective of reaching 1000 stations by 2030. There are 150 operational stations in Europe, with 750 being rolled out. 3,700 stations are in the works for 2025. To support this developing infrastructure, several European countries have introduced incentivizing policies to promote the technology: like Germany, which has just allocated a budget of 700 million euros to the sector, and France, which finances the purchase of a hydrogen vehicle by up to 16,000 euros.
The arrival of the first mass-produced hydrogen electric cars, including professional vehicles currently refueled on company premises, will help accelerate the development of infrastructure, promising a bright future for hydrogen technology.

**Statement for the third quarter of 2020, published by the ACEA, European Automobile Manufacturers’ Association