All there is to know about charging Renault ZOE 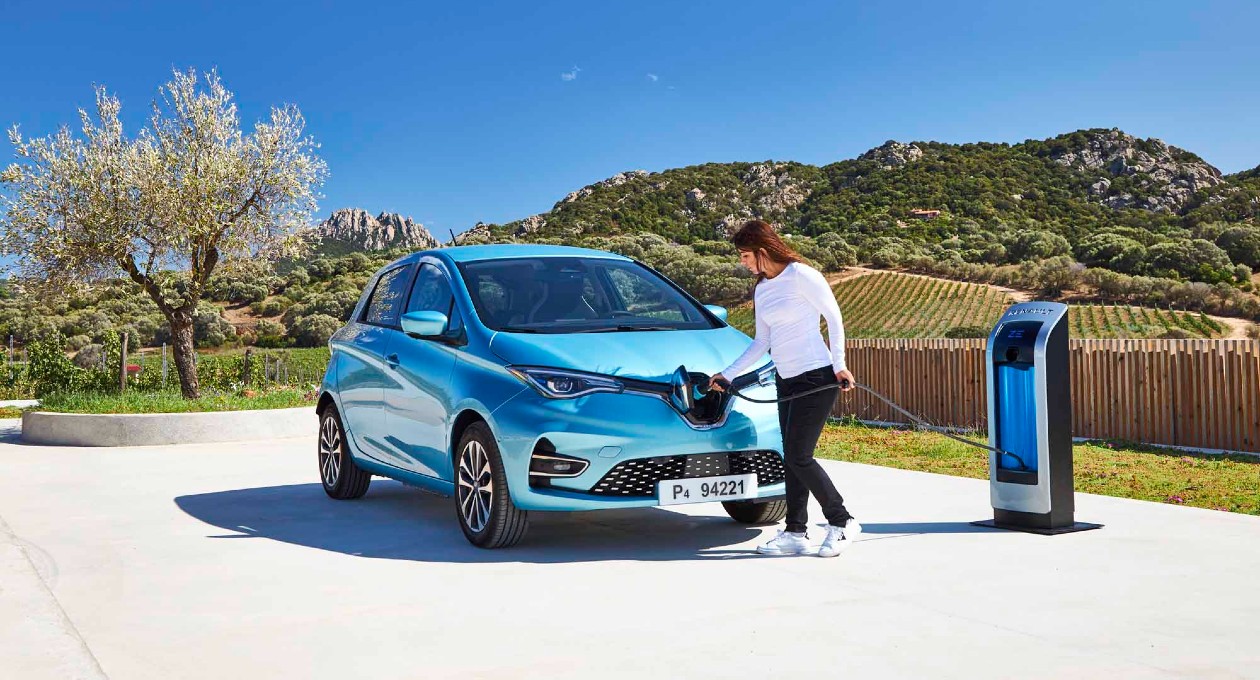 Battery Renault zoe
The benchmark for electric vehicles in Europe, Renault ZOE combines performance with practicality. Its charging characteristics, whether at compatible outlets or available terminals, provide versatility. Here are the ways you can charge your battery on a daily basis.
by Renault Group

The charging characteristics of Renault ZOE

The current Renault ZOE comes with a Z.E. 50 battery with a capacity of 52 kilowatt hours; in other words a range of 395 kilometers (WLTP*). Housed behind this electric car’s diamond logo, a CCS Combo connector ensures the vehicle is compatible with the most powerful charging stations in Europe, such as the fast and rapid chargers found on highways, as well as a Type 2 connector for conventional charging terminals.

Which equipment to use for charging Renault ZOE

The CCS Combo connector can be hooked up to the 50 kilowatt DC terminals found on highway charging stations for a record charge time (150 kilometers of range recovered in 30 minutes** on a rapid charging station!). The Type 2 connector is used to recharge the Renault ZOE battery on numerous public (and private) charging stations, particularly at 22 kilowatts where charging is optimized, and on other norm-compliant infrastructure, for example company, mall or municipal parking lots. Lastly, it can also be used at home via a Wallbox or Green’up socket. How to plug and unplug a Renault ZOE

Renault ZOE’s Caméléon® charger (with its built-in Type 2 connector) can be hooked up to home sockets (like Green’up), Wallboxes and the most common public charging stations, via a cable supplied with the vehicle. It is recommended to start by attaching the cable to the charging station, then to the vehicle (and inversely when unplugging.)

ZOE can also recharge on rapid charging stations, where the cable connected to the terminal is plugged directly into the CCS Combo socket on the vehicle.

How to recharge Renault ZOE at home

For individuals who want to switch to electric, it’s useful to know the different options for charging at home. In fact, figures show that this is the principal place that drivers choose to charge their car, in order to recover full range every day.

What socket do you need to charge Renault ZOE at home?

There are three coexisting solutions for recharging Renault ZOE at home. The first is quite simply via a typical domestic socket. But its limited power output necessitates a relatively long charge time (over 24 hours for a full charge), and is not recommended on older electrical installations.

Green’up sockets, which are installed in the place of a traditional domestic socket, reduce the charge time. They deliver up to 3.7 kilowatts of power, in other words a maximum gain of 1.4 kilowatts over a traditional electric socket.

Lastly, while it requires installation by a professional, a “Wallbox” is seen as the ideal solution for recharging Renault ZOE at home. It provides at least twice as much power as a Green’up socket.

Note that, in certain cases, residents can benefit from the right to charging facilities. Certain steps must then be taken by the property owners in order to install charging stations in the building. How to recharge Renault ZOE on a Wallbox

The principle of a Wallbox is simple. It is a wall-mounted box connected to the electrical board via a dedicated circuit. It is particularly easy to use with Renault ZOE, because the cable provided with the car can be plugged in directly!

How to install a Wallbox for Renault ZOE

Requiring the skills of a professional, a Wallbox can be installed in just a few hours. The technician performs a diagnosis of the electrical grid, then installs the device before connecting it to the domestic circuit.

How to recharge Renault ZOE on a public charging station

Charging your electric vehicle on a public terminal obviously depends on the type of charging station available. An increasing number of 22 kilowatt charging stations, which are used with the Type 2 connector, are made available by local authorities and at private premises (businesses, for example.) This same power capacity is found on the Renault network’s public charging stations, outside shopping centers and public parking lots etc.

Recharging Renault ZOE on the highway can be done using the rapid terminals provided by various private networks. On this type of infrastructure, use the electric car’s CCS Combo connector and benefit from a power output of up to 50 kilowatts when recharging. How long does it take to charge Renault ZOE?

The time it takes to recharge a Renault ZOE depends, as we’ve seen, on the type of charging station available. In practice, it takes around 8 hours at home on a 7 kW Wallbox to recover 300 kilometers of range**. Away from home, 2 hours on an 11 kW charging station (the most commonly installed by local authorities) will add 125 kilometers to ZOE’s range, or just 1 hour on the 22 kW stations found outside certain stores**.

How much does it cost to charge Renault ZOE?

The cost of charging an electric car depends on the electricity rates of the country in question. In France, a full recharge of Renault ZOE at home comes to around 7.5 euros (average cost of 0.145 euros/kilowatt hour), 12-13 euros in Great Britain and Italy, and 15 euros in Germany.

Thanks to the excellent range offered by its battery, its handling and connectivity, Renault ZOE is an enjoyable to drive as it is simple to recharge.

** The duration and distances mentioned here are calculated from results obtained by New ZOE during the WLTP (Worldwide Harmonized Light Vehicles Test Procedure, standardized cycle: 57% urban driving, 25% suburban driving, 18% highway driving), which aims to represent the actual conditions of a vehicle’s use. However, they cannot foresee the type of journey after recharging. The charging time and recovered range also depend on the temperature, the degree of battery wear, the amount of power delivered by the charging station, driving style and the level of charge.