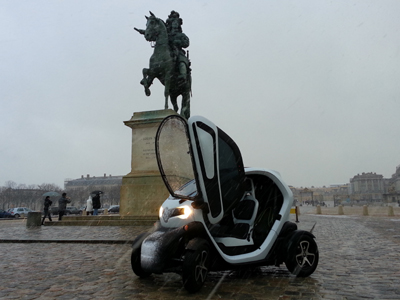 Great news: the temperature this morning was below zero and snow forecast for the afternoon. The perfect weather, then, for trying out Renault’s full-electric quadricycle in conditions a good deal harsher than the ones we had in Ibiza. So can Twizy handle the cold and the snow and all the other delights winter has to offer? Read on to find out.

I picked up my Twizy from the Renault press fleet, where a handful of Twizys were charging in an underground lot, readying to hit the road. To our surprise, our Twizy was fitted with windows in the upper sections of the doors. Made out of two parts, a metal frame and a flexi-glass panel, the windows can be assembled in just a few minutes. The new accessory retails in France at €349. To open the gullwing door, you have to unzip the window to access the handle while holding the frame to one side using a tab. You get the hang of the system fast. Coming up to 6 pm, it was time to head home. The range display read 50 km, more than enough for the journey to my place, 20 km outside Paris. My only protection against the cold was a thin coat, so I was quick to appreciate the new windows. It was cold but the windows protected me from wind chill – except for a breeze or two on the back of my neck.

The traffic was heavy but Twizy made steady progress. Obviously you can’t weave through the traffic as you would on a motorbike, but the quadricycle is a treat to drive. The basic qualities of the vehicle remain. It pulls away energetically from lights, the quiet of the powertrain is still a marvel, and its appealing looks make people instantly warm to it. On the other hand, one of Twizy’s (relative) limits is that it isn’t authorized for highway use.

As I continued on my journey, snow began to fall. The windscreen wipers did their job, the lights provided excellent visibility and the windows kept the snowflakes and the cross winds out. The only place I felt cold was in my fingers. Range stabilized at around 32 km. It’s true that the first part of the ride made major demands on the battery, with a long uphill stretch, while the rest of the journey was relatively flat. Which goes to show that range depends more on driving style – relaxed or jittery – than on battery charge (which has its own indicator). I got home as the snow started to stick. I parked Twizy in an underground parking space and plugged it in using a regular socket, easy as pie. The generator activated, showing a battery charge of 47%. After three hours, the battery was fully charged and I took Twizy up to the street to see how it would handle the night. The first thing I noticed as I walked up to my Twizy at 8 am was that the windows had done their job. There was no snow on the front seat and practically none in the back. I wiped the snow off the windscreen and – this time wearing a winter jacket and gloves – started the car no problem. Twizy obviously doesn’t have all the comfort of a regular car. There’s no heating or radio, although you can use a removable music player. The road was fairly slick, but Twizy handled the conditions well. The direct braking encourages you to take all the necessary precautions. As I drove towards my regular highway entrance ramp, I saw that a big jam had built up. I happily made a detour through Versailles to get to work. But the traffic was still fairly dense, and pointed to two problems. First, at a standstill, exhaust fumes can be bothersome. Second, if you haven’t got the right cloth, it can be hard to get rid of the condensation on the window. After a photo op at the statue of Louis XIV, I continued on my way. Twenty minutes later Twizy arrived at its destination. After driving 30 or so kilometers that morning, the battery showed a charge of 52%. To sum up, driving Twizy in the middle of winter is not just possible but a lot of fun, as long as you can put up with one or two minor inconveniences, chief of which being the cold. Some Twizy aficionados have wasted no time in making their vehicles more comfortable. Renault-origin accessories include covers for drivers and passengers and a hands-free kit. It’s true that the half doors and new upper windows keep raindrops and drafts out of the vehicle in bad weather. But most of all Twizy is still a thrill to drive, unlike any other vehicle. And as we all know, the sun always follows the rain!

To read another account of how Twizy drives in winter conditions, check out what Yoann Nussbaumer had to say on his blog, Automobile Propre (in French though).