What is the lifespan of an electric car battery? 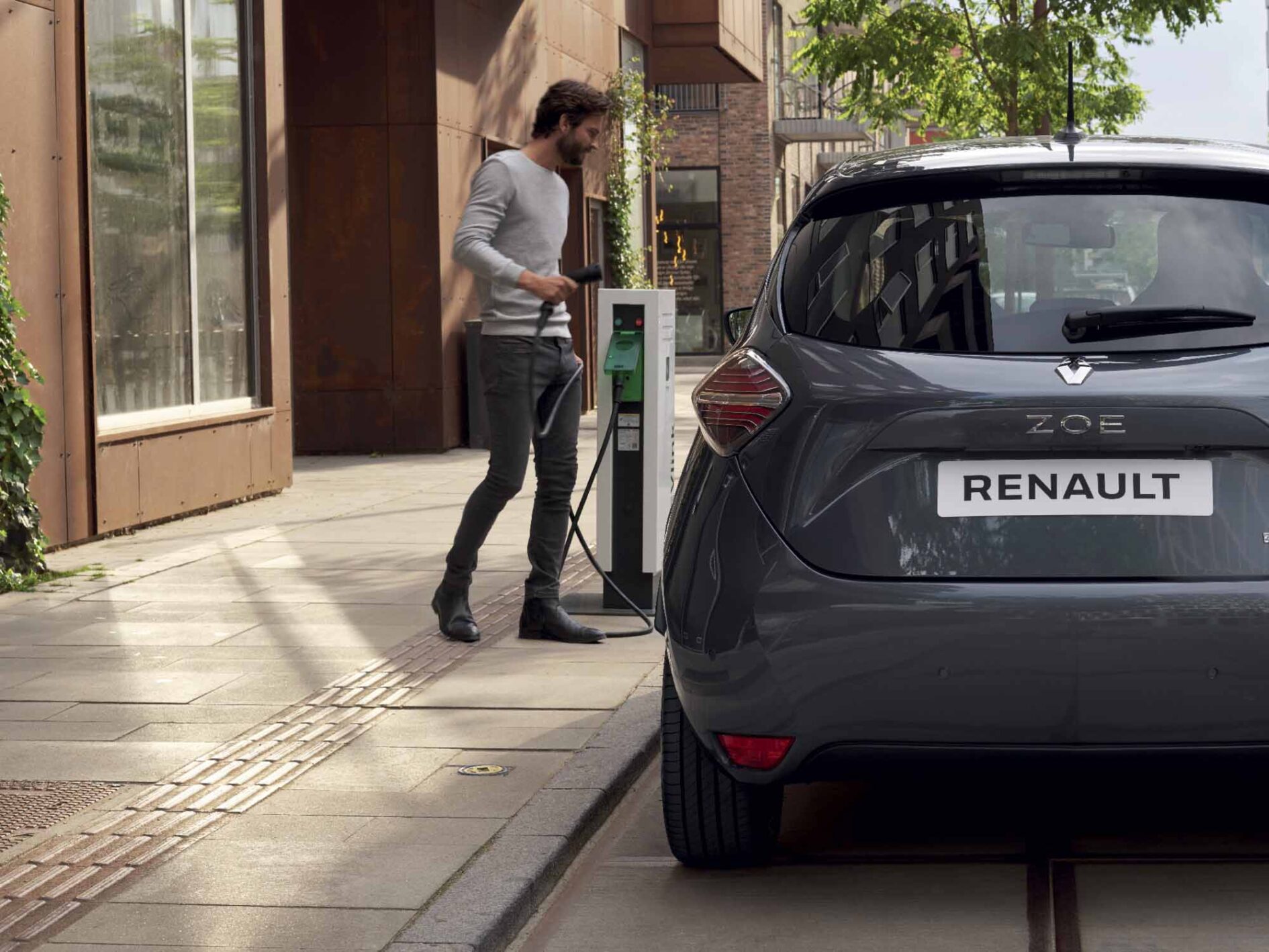 Battery
Thanks to the considerable progress made year after year, lithium-ion batteries stand up very well to the test of time. With this in mind, how long does a battery last? What advice is there when it comes to extending lifespan as much as possible? In this in-depth guide, the lithium-ion battery in the floor of your electric vehicle reveals the secrets of its surprising longevity.
by Renault Group

The average lifespan of an electric vehicle battery

So how well does an electric vehicle stand up to the test of time? Is it linked to the life cycle of the battery inside the vehicle? These questions fuel conversations around the electric vehicle… But you do need to be sure that you’re talking about the same thing!

Car battery, electric car battery, motor longevity… Let’s not get it all mixed up!

An electric car battery is nothing like the conventional rectangular unit that is the regular “car battery” you’ll find next to a combustion engine. Let’s not get the lifespan of an electric vehicle motor mixed up with that of the battery that powers it, either. The motor of an electric vehicle, in theory, has a very long life. After all, the issue of lifespan is primarily about the lithium-ion battery itself.

What’s the lifespan of a lithium-ion battery?

First of all, there are several types of battery for electric vehicles. These days, most electric vehicles are powered by batteries called “lithium-ion,” which are similar to those that power laptops and smartphones but with much greater capacity!

When we talk about how long things last, we need to shine a light on the intrinsic characteristics of the battery and the manufacturer’s very high standards for achieving optimal automotive use. The end of the “automotive” life of a lithium-ion electric car battery does not mean that its range drops completely. Instead, there’s a gradual decline in the battery’s capacity as it racks up charging/draining cycles.

As a pioneer of electromobility, Groupe Renault estimates that the lifespan of its batteries – for automotive use – is around ten years. But this doesn’t mean the end of the battery’s life. It still has plenty of energy to spare in its “second life” which can add on another ten years: stationary energy battery storage system, vehicle electrification, short-circuit green energy distribution, etc. Temperature affects lithium-ion batteries significantly, but it’s important to distinguish between long-term battery wear (over its lifespan) and short-term battery performance (notably, its charging time). In the long term, heat can have a negative effect on battery lifespan, whereas it does not affect performance. Conversely, very low temperatures can have an impact on the short-term performance of electric vehicle batteries. But it will have absolutely no impact on how long the battery lasts, meaning that even frequent extreme cold won’t shorten its lifespan.

Other factors are at play too. This one might seem obvious, but it’s still worth bearing in mind: battery wear occurs when the battery is in use! That said, leaving an electric car parked for extended periods in high temperatures and/or when the battery is fully charged can also have a negative impact on how long it lasts.

What are the actual rules for keeping a lithium-ion battery from getting old before its time? There’s a series of dos and don’ts to embrace to keep your electric vehicle battery in good shape.

A few routine dos and don’ts can optimize the battery’s lifespan. When it comes to temperature control, if the vehicle is parked for a particularly long time, it’s advisable to park it in an area shaded from direct sunlight and raised temperatures if possible. Another thing to do in such a case: keep the maximum charge not at 100%, but below 80% instead. It’s not mandatory, but if you think about it, do it!

In terms of charging frequency, it’s pointless to fully charge every evening for trips that total less than 50 kilometers per day. Once a week should be enough. Go ahead and make the most of the battery at all stages of the charging cycle rather than keeping the level high by charging frequently.

To help make life easier for electric car drivers, manufacturers generally offer apps or online platforms to manage remote charging. At Renault for example, the MY Renault app allows you to program the charging process, track its progress, and view a statement showing the associated electricity consumption. By charging the vehicle during off-peak times, for example, the driver can have the car 80% recharged by the following morning. In “rapid charge” mode on major roads, a level of 80% is also advisable. It also makes sense economically as charging is generally billed in units of time on these charging points. The charging speed is also reduced considerably between 80 and 100%. All of the charging information accessible via MY Renault helps the driver to form good battery management habits to keep the battery in good shape for as long as possible.

What charging power level will keep the battery of an electric car in good shape?

What’s the right way to charge a vehicle battery? The type of charge for an electric car, meaning the power delivered by the charging point, has a role to play in how long the battery lasts. Charging at fast-charge charging points that are “Combo CCS”-compatible, like those found at highway service stations deliver a lot of energy within a short period of time. But it’s not recommended to make this your main electric car charging mode as it tends to generate heat in the battery. Renault is addressing this issue with active cooling ventilation on the ZOE and water cooling on the Twingo Electric. Fast charging, which is often billed by the minute, can also end up being costly. In public places, the charging points to favor are the AC ones, which account for the vast majority of facilities around. They are suitable for normal, daily use. Favoring a charge at a lower power level at these charging points will help the lithium-ion battery to last longer, while also going easy on your wallet. How to replace an out an electric car battery?

When it comes to electric vehicle maintenance, don’t get lithium-ion batteries mixed up with combustion-engine vehicle batteries that you can buy in a store and easily install yourself. The battery unit of an electric vehicle is unwieldy, heavy, hard to access, and not easily transported from one place to another. Its cells contain a large amount of electricity, which makes it hazardous to handle without the right equipment and tools. Switching it out – which is not a part of normal maintenance – cannot be done without the services of an accredited mechanic in a garage.

The second life of batteries

Once it has reached the end of its “automotive” life, the lithium-ion battery is ready for a second life. Its performance is still enough to serve an array of purposes like stationary energy storage. With an increasingly ambitious view to the circular economy, Renault is transforming its site in Flins, France, to set up the Re-Factory, Europe’s first circular economy factory dedicated to mobility. The manufacturer is also carrying out very promising experiments in Belle-Île-en-Mer and Porto Santo. These islands, which used to be reliant on fossil fuels, are gradually becoming truly smart islands. They are the laboratory for full-scale tests on storage using electric vehicle batteries and the local distribution of green electricity produced by local renewable energy sources.

Other programs, like Advanced Battery Storage for example, make use of electric vehicle batteries to balance out the network in real time, so that as much low-carbon electricity as possible can be incorporated. Another initiative on the Seine in Paris involves reconditioned batteries fitted into the pleasure boats in the Paris Yacht Marina.

Having looked at the capacity of the battery to be repaired or used for other purposes, Groupe Renault pays for and arranges for it to be recycled by its accredited partners. Governed by particularly stringent regulations, the recycling of batteries from electric cars meets a range of requirements. Unlike the batteries used in other devices, all of the battery cells that power the electric vehicle are salvaged. This guarantees record recycling efficiency. Not least, it makes it possible to recover precious metals like nickel and cobalt for subsequent use.

How does the future of electric car batteries look?

Will the future be all about solid-state batteries? They set themselves apart from lithium-ion batteries due to their solid rather than liquid electrolytes and give electric vehicles higher energy storage capacity. But they are not the only solution. Renault is opting for multiple technologies that complement one another. This is the case with the fuel cell for the hydrogen car, for example!

Continuous improvements are also made to the current batteries. For many years now, Renault has been working on optimizing the architecture and chemical composition of batteries to gain density and pack more energy into the same amount of space, like on the Renault ZOE. This adds to the innovations aimed at reducing the impact of external factors on longevity, like with the water-cooling system of the Twingo Electric battery. When you factor in a second, post-automotive, life designed to store green electricity from fluctuating renewable sources, the battery’s ability to stand up to the test of time is in line with a real circular economy approach.