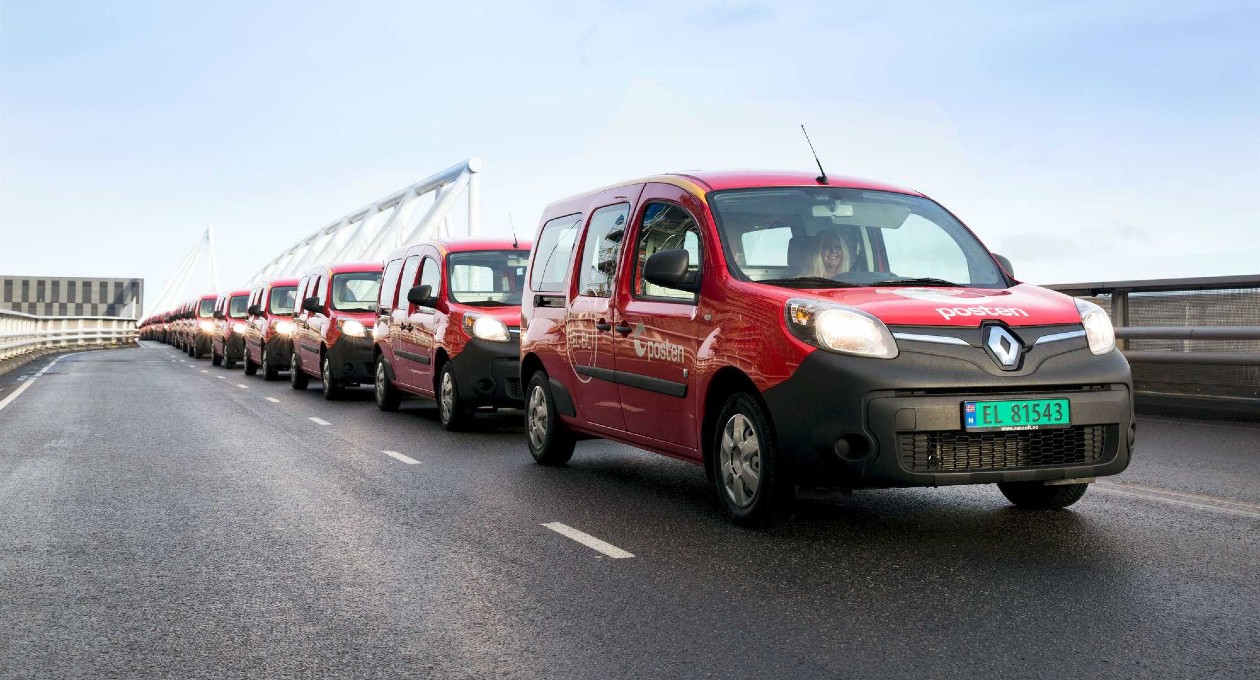 utility vehicle
Every day, their vehicles are criss-crossing city centres to deliver letters and parcels. In ever-increasing numbers, European postal services are choosing electric to ensure their last-kilometre deliveries.
by Renault Group

For mail services with fleets that sometimes top several tens of thousands of vehicles, the reasons for switching to electric certainly aren’t lacking. Beyond economic issues, they also see the change as a response to the challenge of reducing emissions and a way to continue to access urban areas with restricted traffic. Advanced fleet management capabilities and increased driver comfort don’t hurt either!

#1 CORREIOS - Spain
A resounding success for the Spanish postal service

Correios, the Spanish post, has been very interested in electric for its two- and four-wheeled vehicles. Since 2016, the Iberian company has had about 300 electric motorcycles and 25 Kangoo Z.E.s tasked with ensuring deliveries to the centres of Madrid, Barcelona, Seville and Valencia. The experience has proved to be most satisfactory, as 42 new Kangoo Z.E.s have just been outfitted in the Correios colours.

The Spanish Post Office has recently been delivered a fleet of 42 Renault #EV! It's the 7th national postal service in Europe to choose Renault, joining those of the Netherlands, Norway, Portugal, Slovenia, Switzerland, and France. 📯 pic.twitter.com/ZYCqlmG9wZ

Already largely converted over, the Dutch post inaugurated a new part of its fleet of electric vehicles: in 2018, it put several units of the latest Renault Master Z.E. into circulation. Whereas the Kangoo Z.E. mini-vans deliver letters and small parcels, this 100% electric light utility vehicle will ensure the collection and delivery of larger parcels. The first detachment is destined for the eco-districts of Utrecht and Leeuwarden, but PostNL promises that other cities will also soon be equipped.

At this very moment, @PostNL is driving with the very first #RenaultMASTERZE in Europe! It's just the beginning: the Dutch mail company has ordered 17 vehicles already. 🚙🚙🚙 pic.twitter.com/SLO7kFIJLQ

#3 POŠTA SLOVENIJE - Slovenia
In Slovenia, an extended range for the Kangoo Z.E.

Further east, since the end of 2017, Pošta Slovenije has been undertaking a transformative process that seeks to simultaneously develop both the company image and technical innovations at the logistical level: it’s a dual objective perfectly suited to the adoption of electric vehicles. The Slovenian post has used this occasion to extend its fleet of Kangoo Z.E.s, taking advantage of the new vehicles’ extended range to make deliveries 100% electrically outside of urban areas.

This year 17 #KangooZE equipped with the new battery and extended range were added to the Slovenian Post’s fleet! pic.twitter.com/oJIS07ASj0

In a country where electric cars are already considered the norm, letter carriers are setting an example: since 2015, electric vehicles have numbered in the hundreds in the Posten car fleet, and the Norwegian Post certainly has no intention to stop now.

The Norwegian Post has chosen #Renault for the delivery of 300 #KangooZE, no less! #EV pic.twitter.com/KqapdNBEIo

#5 LA POSTE - France
In France, one of the largest electric fleets in the world

France, the birthplace of Groupe Renault, the European pioneer of electric vehicles, is in on the action. The French Post can now count 7,000 Z.E.s among its ranks, making it one of the world’s leading electric fleets across all business sectors!

La Poste is now equipping every major city with charging stations, and is studying how to adapt its operations to capitalise on the strengths of its electric vehicles. In total, seven European postal services have chosen to rely on Groupe Renault’s electric vehicles, since Switzerland and Portugal can also be added to the five examples presented in this article.