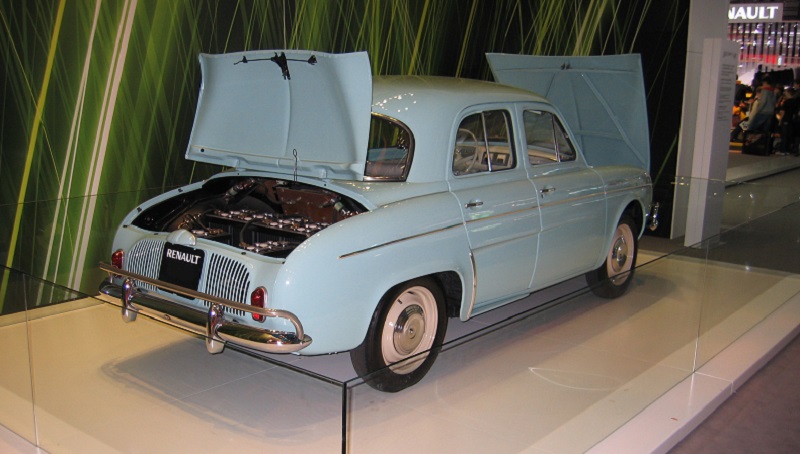 collection Dauphine electric vehicle
The Henney Kilowatt made its fleeting appearance in 1959 in the United States, an American electric Dauphine designed by the National Union Electric Corporation and Eureka Williams. At this time in history electric vehicles were pretty much unheard of, so this was a wild project involving huge challenges!
by Renault Group

Birth of the electric Dauphine project

In the late nineteen-fifties and early sixties, Renault was gradually withdrawing from the US market, after experiencing mixed results there. But around the same period the Renault Dauphine was attracting interest for what was at the time a rather unusual reason: electric power. In 1959, Russell Feldman, president of the National Union Electric Corporation, owner of the Henney coachwork firm, and battery producer for Exide Batteries, asked Renault to deliver 100 Dauphines without powertrains. The Dauphine was chosen, obviously because Renault had some remaining stock in the US but also for two important reasons: it was much lighter than other cars on the market, and the rear-mounted engine compartment was ideal for fitting an electric motor, usually a General Electric unit, found in Fenwicks. The Henney Kilowatt, as it was known, would bring in orders from a grand total of 47 customers, well in advance of the rest of the world as regards environmental awareness.

Most of the electric cars (32) went to electric utility companies, but motorists could buy them directly from Henney too. Which was the case of the State of Tennessee authorities, who ordered electric Dauphines for use as a service vehicle. We know of only 2 of these cars in roadworthy condition today. There are a dozen or so, in various states of repair, in the US and 2 in France (including one owned by Renault Classic). Henney's Dauphine Kilowatt existed in two versions: the first, intended for urban use, was powered by 12 6 V batteries wired in series, and achieved a top speed of 64 km/h and a full-charge range estimated at 64 km. Only 8 of these cars were made. The second, powered by 14 6 V batteries, raised the top speed to 80 km/h and the range to 75 km. Electrical systems took up a great deal of space on the car, and the Henney Kilowatt did not have a boot. Even so, the vehicle weighed in at 950 kg to 1100 kg depending on the version. Both models were available in a choice of three colours: red, grey or black. Battery packs in the front and rear of the Henney Kilowatt (credit: dauphinomaniac.org)

How Renault ZOE was inspired by this American electric Dauphine

Electric vehicle technology has come a very long way since then! But, sure, the evolutionary traces are there if we look for them. For a start, we have braking energy recovery: on a more advanced version developed a few years later by Bell Laboratories, we find partial battery recharge during braking, plus onboard electronic control.

A second point in common is the somewhat similar business model. Because of the high battery price, Yardney (who also developed an electric Dauphine) planned to lease them rather than sell them, and thus make the car more affordable. But the project was too far ahead of its time to survive.

Unfortunately, all the early attempts to introduce electric-powered vehicles ran into the same sort of obstacles we find today, specifically the lack of widely available charging structures. We'd like to thank Jean-Jacques Dupuis of Gazoline magazine for his article on the subject and his precious help to us in preparing this blog article.