Art and industry: an odd couple.
And yet… Renault has never been too concerned with received wisdom. Created in 1967 on the initiative of Claude Renard, a company executive and discerning art connoisseur, the Renault Art Collection has been at the very forefront of what has become a social phenomenon: the diverse corporate collection capable of reaching the widest possible public. The originality of the Renault collection lies in a unique sponsorship programme that has worked with 35 artists over the years.
Departing from the usual financial support model, Renault conceived of a collaboration based on exchange. As well as gaining access to spaces in which to display their pieces, the artists would have direct access to workshops, factories and to men at work. Discussions between workers, engineers and artists proliferated. The processes of creation fed into discussions from all sides and were highly rewarding for all concerned. The result: art projects that are exceptional in terms of the workspaces, materials and other inputs available to the artists and, for a public keen to learn about a new world, enriching access to contemporary art.

The machine and calligraphy, a story of movement.

A member of the famous Cobra group in the 1940s, Pierre Alechinsky is a Belgian painter and engraver. During a visit to Japan in 1955, he discovered calligraphy. From that time, this technique would take a central role in his works of art. His paintings present a dual image. The first central image is surrounded and framed by a second image. A composition that allows the artist to suggest multiple parallel narratives. At the beginning of the 1980s, Alechinsky created a series of paintings as part of his collaboration with Renault. The piece Roue d’herbe (Grass Wheel) explores the theme of mechanisms in action, of movement mastered and ordered, just as, in other words, the way industrial machines operate. 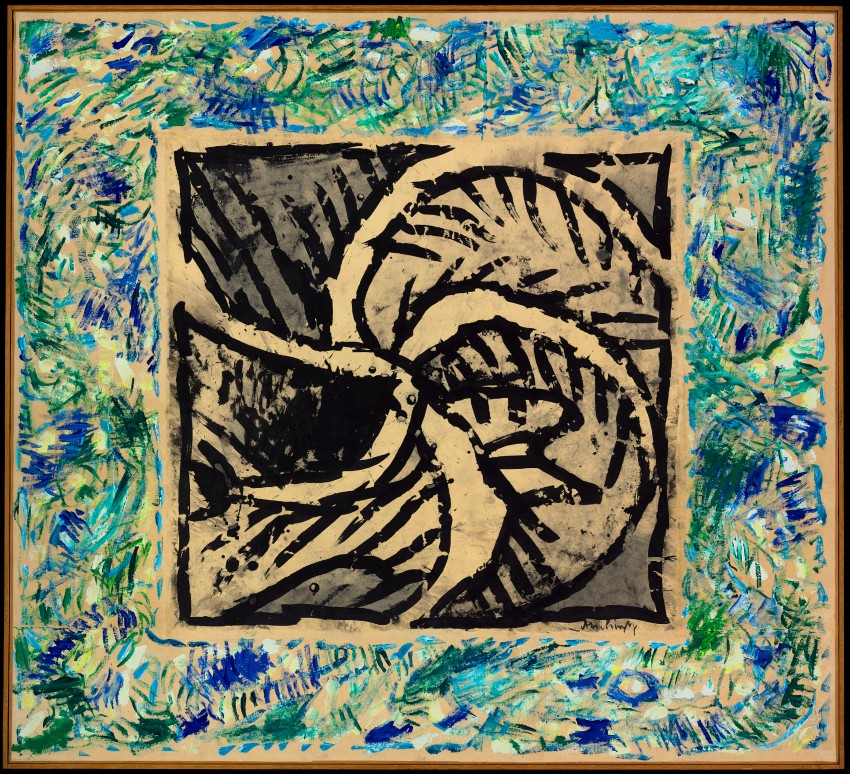 Renault was a palace from which I could take whatever I wanted.

A founder member of the New Realist group, the painter, sculptor and visual artist Arman was one of the most prolific French artists of his generation. In 1967, whilst looking for new materials for a piece commissioned for Expo 67 in Montreal, Arman approached Renault. The result was the Victoire de Samothrace (Victory of Samothrace), one of his most spectacular sculptures and a long-lasting collaboration between the artist and the company.
At the heart of the industrial machine, the factories and workshops were transformed for Arman into so many laboratories and “storehouses of nuance” that allowed him to explore his creative process, based on a cycle of production, consumption and destruction. 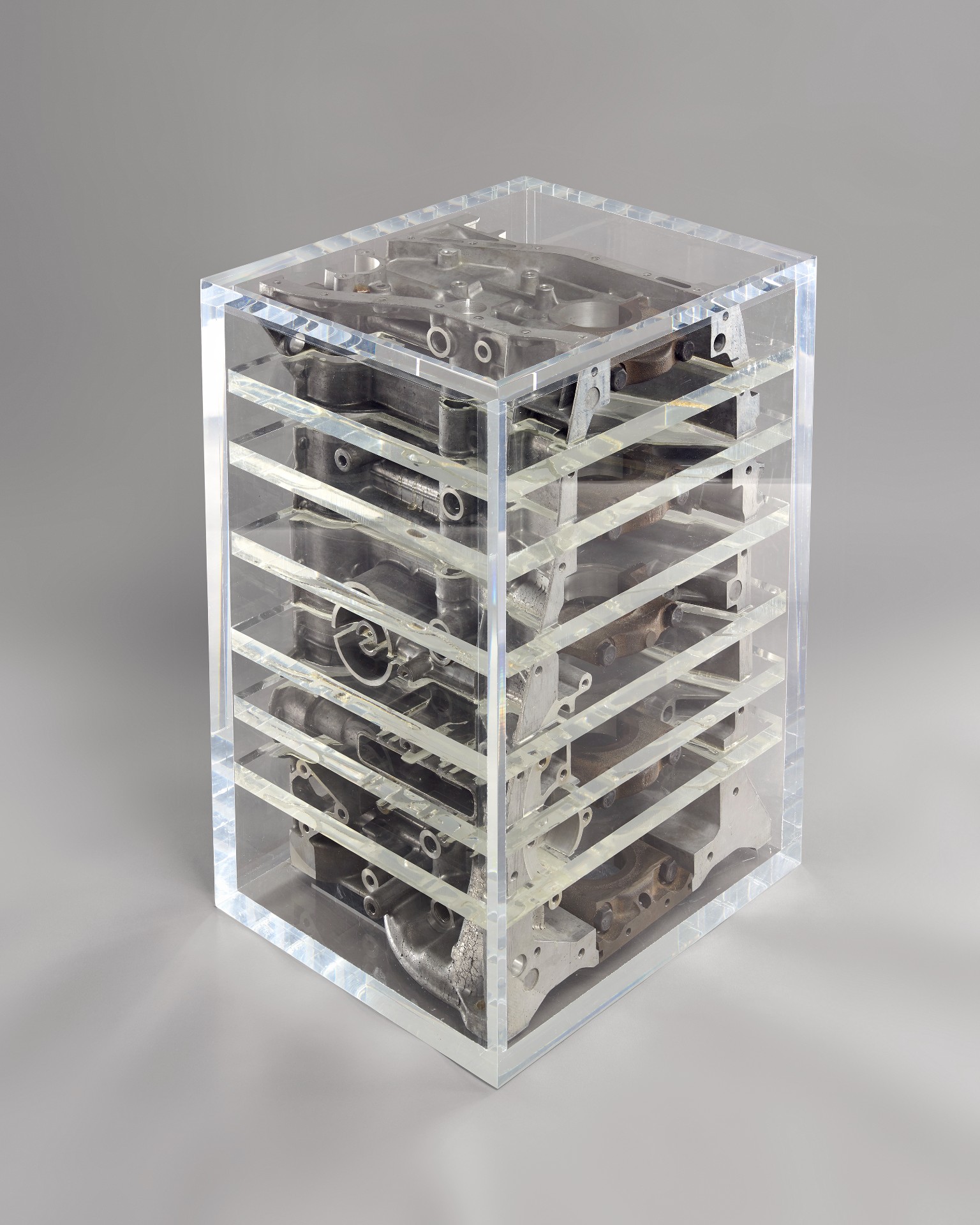 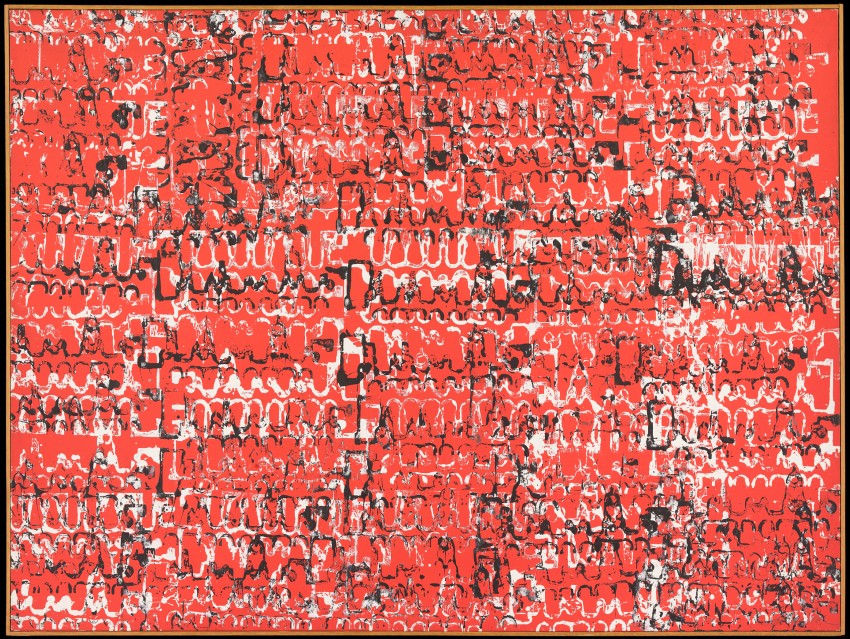 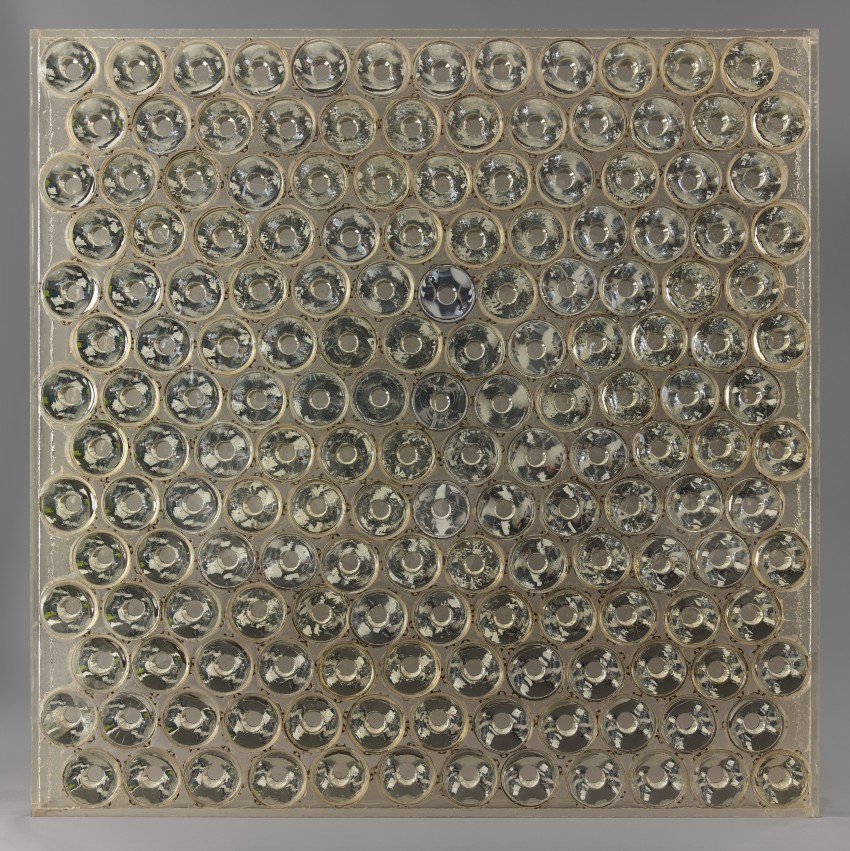 Delta 3D was a major operation that required several technicians who worked with much care and enthusiasm to ensure its success.

French painter, sculptor and visual artist, Jean Dubuffet was the first theorist of Raw Art. His works are spectacular and overturn every visual point of reference and bodily reflex. Seeking in parallel to create habitable sculptures, Dubuffet worked with new industrial materials, such as polystyrene, expanded polyester and synthetic resins. From 1973, Dubuffet enjoyed the technical and technological support of the company. The most notable episode from this close collaboration was probably the use of the Delta 3D machine, which allowed him to move up from the scale model to the human scale. Dubuffet’s warmth and drole nature have long been praised by the engineers and technicians who met him. 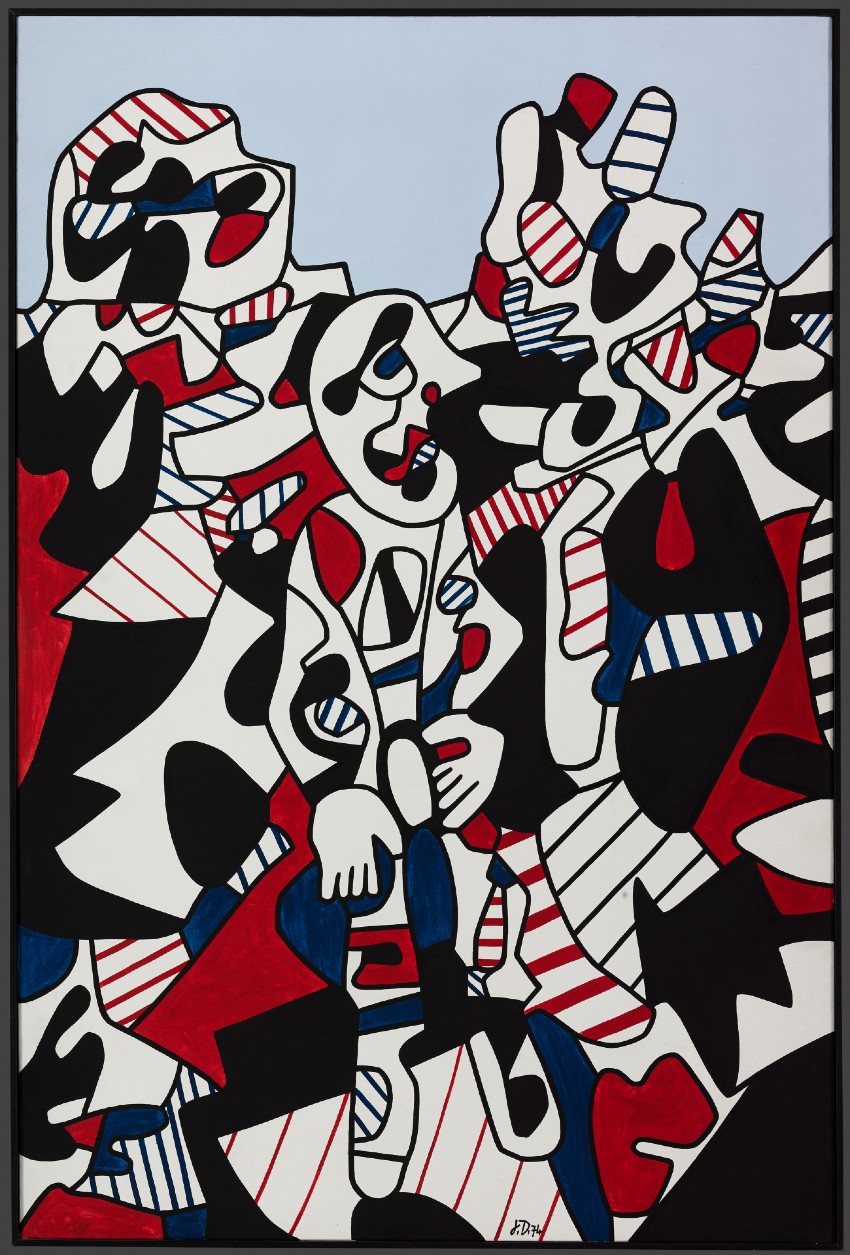 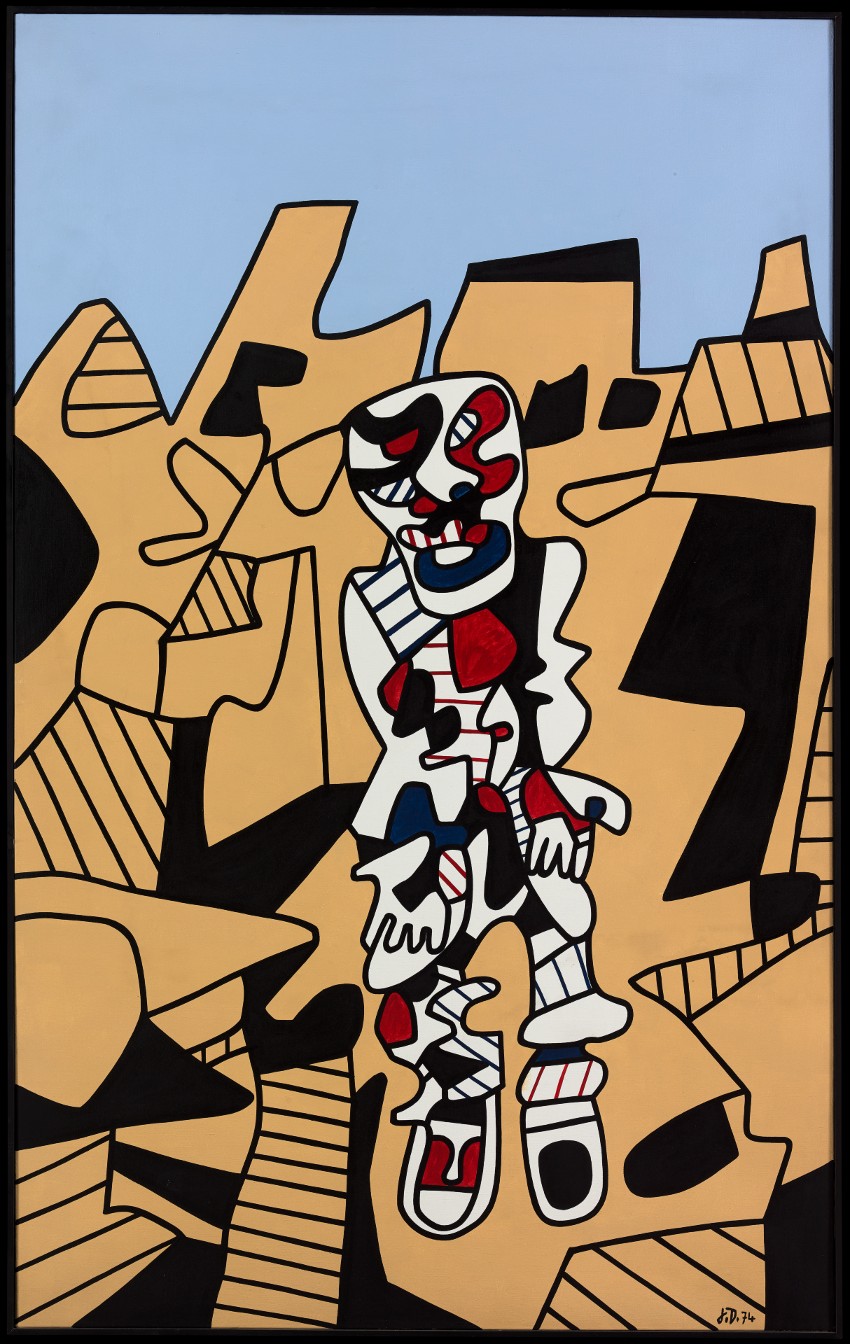 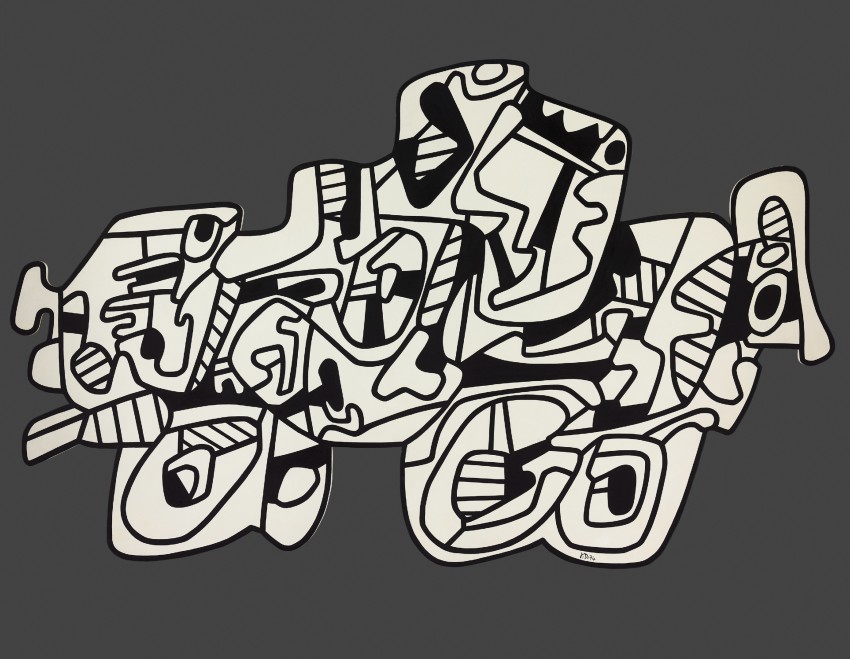 My collaboration with Renault was a sort of idyll that went without a hitch.

The Icelandic painter and co-founder of the Pictorial Movement in France, Erró is famed for his realist figurative art with roots in European pop art. When Renault invited him to bring the worlds of industry and art together, he certainly took the offer literally. Using the company’s huge collection of images, Erró produced a series of twilit pictorial works exploring notions of semantic disconnection, iconographic continuity and the piling up of objects. Erró really does understand that the devil is in the detail. 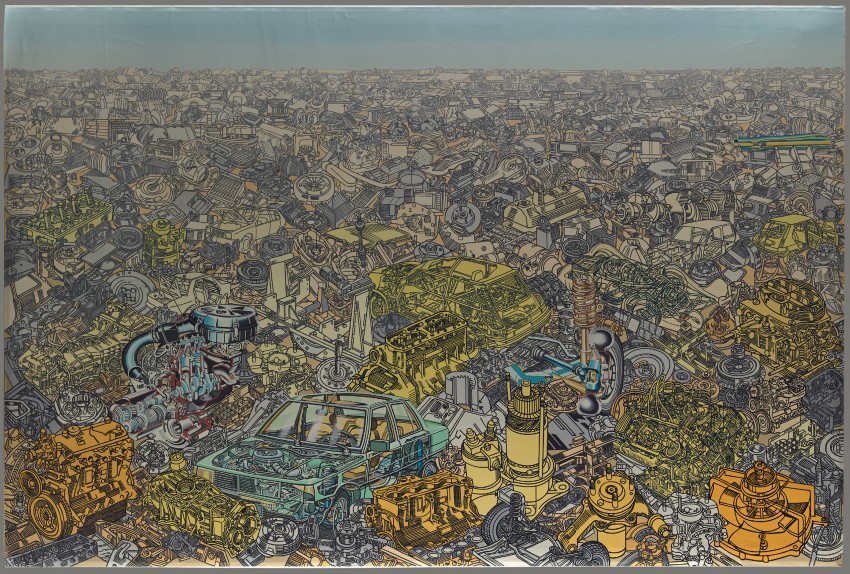 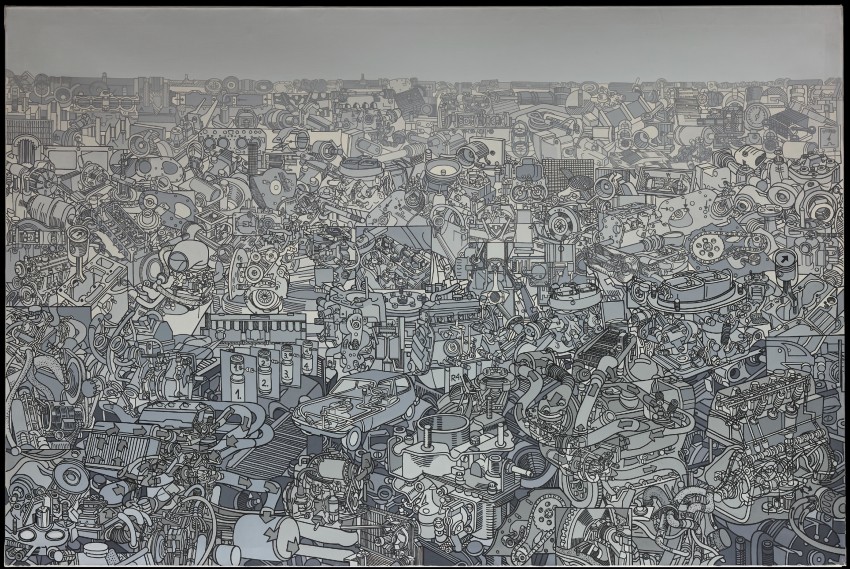 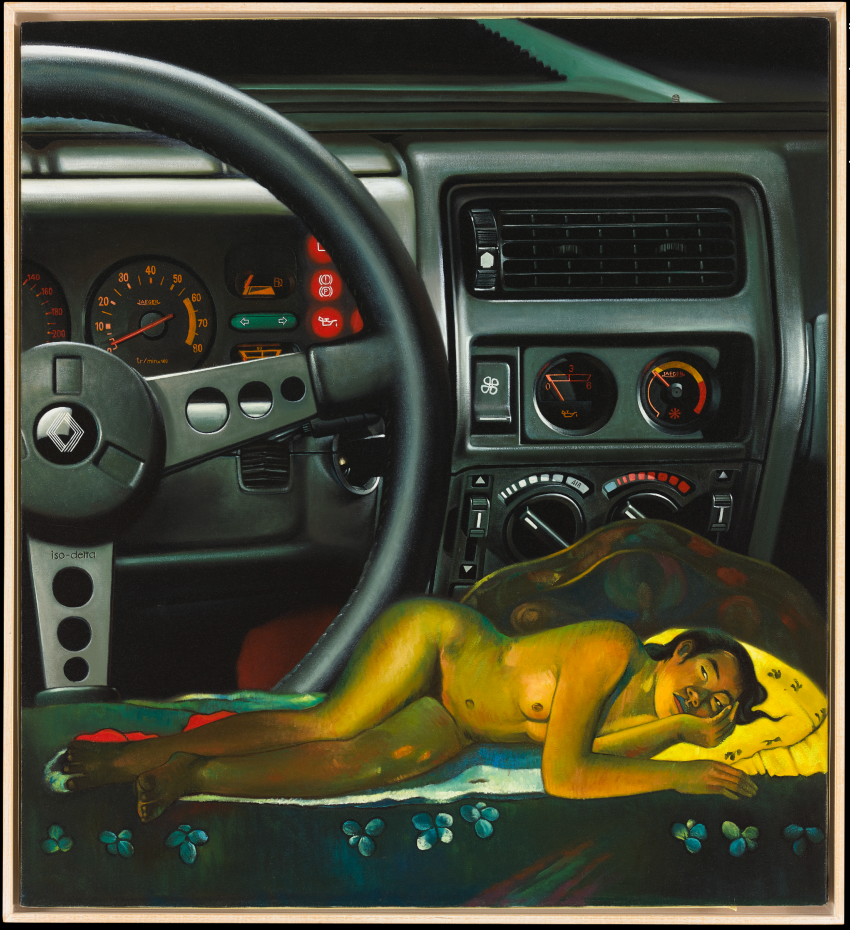 Remembering the contemporary of by-gone days.

Trained at the Royal Academy in London, France’s Jean Fautrier is mainly known for his paintings. However, his work also includes engravings and sculptures. A rich artistic production that spans the first half of the 20th century, well before the Renault Art Collection came into being. As the collection is keen to represent every artistic trend of our times that braves the strict artistic conventions that remain even now, it seemed only natural for it to acquire a piece by Fautrier. The bronze sculpture, Tête de jeune fille (Head, young girl), made its entry into the catalogue of works acquired by the company. 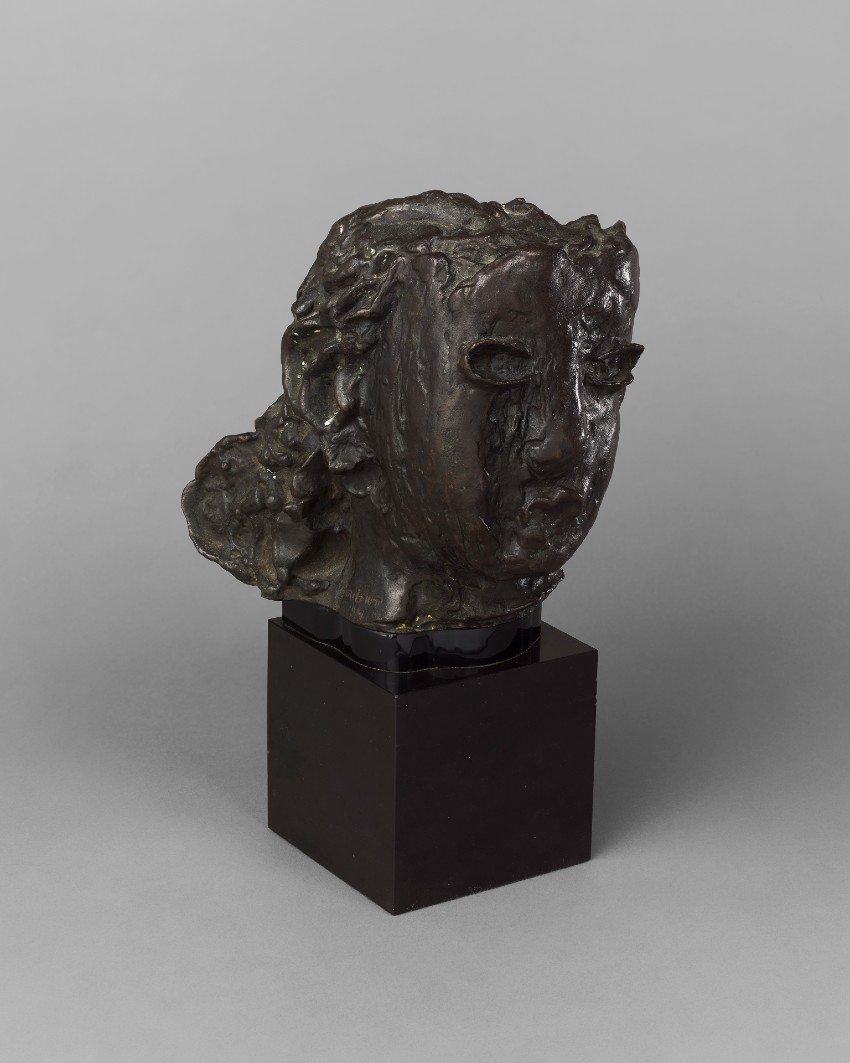 A wind from the west blows over the collection.

US painter Sam Francis is known for non-figurative works that show an aesthetic of colour that was ground-breaking in its time. In the 1980s, when Renault wanted to establish itself in the US market, links were established between “Recherche Art et Industrie”, the body, and some US artists. The piece shown to the public, an acrylic on canvas of imposing dimensions, was then bought from the artist. 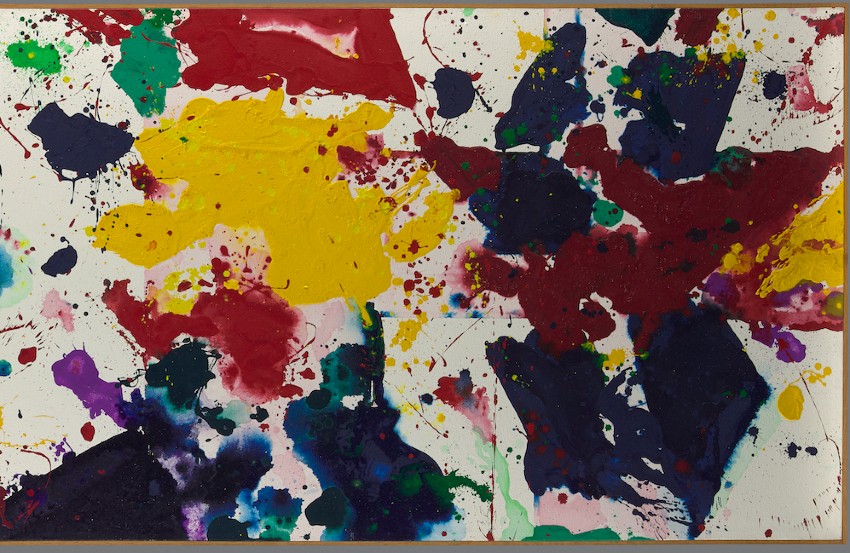 The specta(c)tor, the essential cog in the work.

Argentinian Julio Le Parc is one of the most active artists in the kinetic art movement. New industrial materials offer myriad possibilities to the artist, who explores the setting in motion of paintings and sculptures, in the form of optical illusions. At the heart of his work is the spectator who, by his or her own movements, changes the piece as it is viewed.
In 1983, Le Parc received an invitation from Renault. He created a multicoloured frieze of 47 paintings, which adorn the cafeteria of the new head office, and his Volume Virtuel (Virtual Volume), a painting characterised by a horizontal composition of bright, adjoining colours that make the work appear to expand. This piece was chosen by the Group’s CEO to take pride of place in his office. 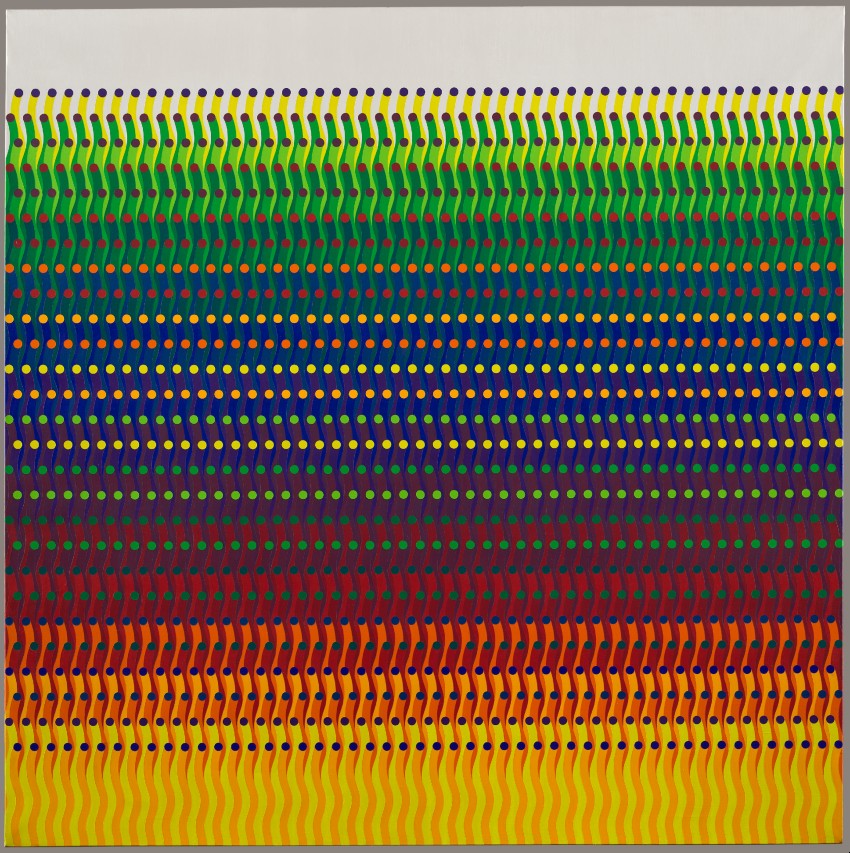 Miró’s art brought into the collection.

Catalan painter, sculptor, engraver and ceramic artist, Joan Miró is a representative of the Surrealist movement. His presence in the Renault Art Collection is the result of a more conventional act: a purchase, pure and simple. In 1974, the company acquired two works. Femme, oiseau (Woman, bird) is an ink on paper drawing and very representative of Miró’s world and imagination, characterised by light, gracious lines. The second work is a sculpture in bronze that can’t fail to remind us of the painter’s Catalan origins. 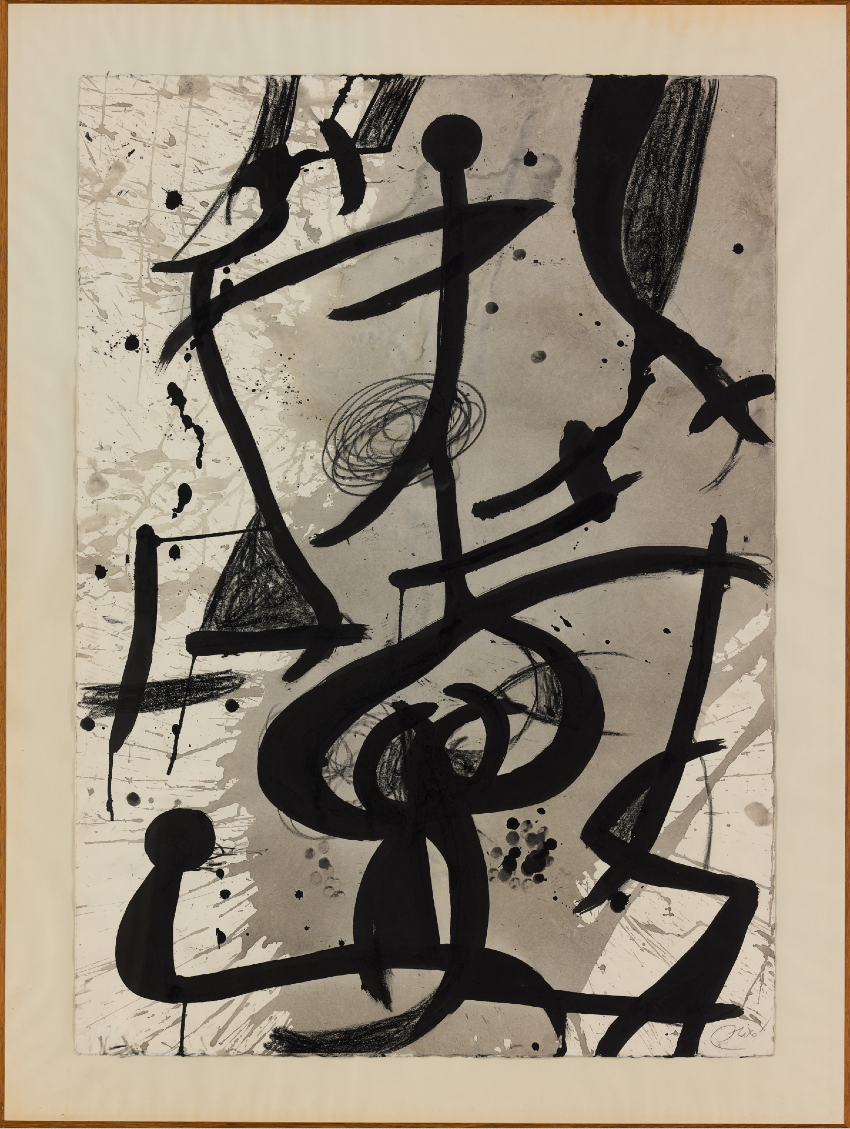 Anatomy and fragments of a Renault Twizy.

French artist Jean-Luc Moulène offers an artistic oeuvre that spans drawings, paintings, photographs, posters and sculptures. In 2011, when a partner of FIAC, Renault called in the artist. Starting from the Renault Twizy car, Moulène conceived of two sculptures inspired by vehicle shapes. What they had in common was innovative forms. Shown at FIAC, the works then travelled throughout Europe, to New York and London. Body versus Twizy is composed of six surfaces, painted in matte, gloss and opalescent blacks. 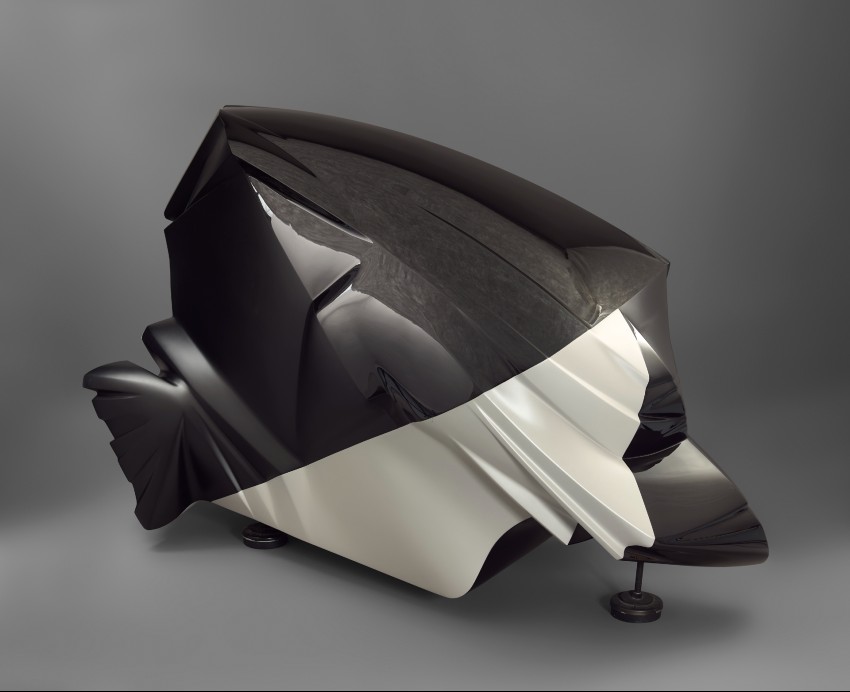 Journalist turned artist, Angela Palmer explores many media. She deconstructs our contemporary world to challenge, inform and make us take a step back. In 2014, she worked with the Group’s F1 teams. At the Viry-Chatillon technical centre, Palmer focused in particular on dissecting the RS27, the world’s most famous Formula 1 engine. This adventure gave rise to several sculptures in a variety of materials. The Adrenalin series would be shown at the Fine Art Society in London, whilst Red Hot, part of this series, would be added to the Renault Art Collection. 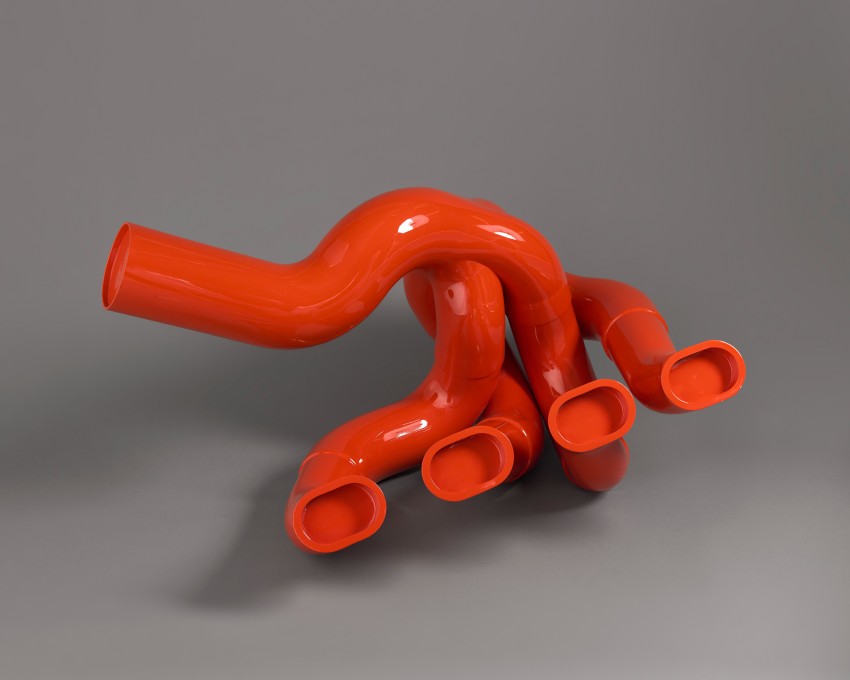 From motorised horses to Neo-Dada is but a single step.

Painter, engraver, photographer and choreographer, the artistic life of US artist Robert Rauschenberg was prolific. His work, part of the Neo-Dada movement, prefigured pop art. So it was inevitable that the Renault Art Collection, which prides itself on its role as a true curator of a century of development in artistic praxis, would acquire a Rauschenberg screenprint. 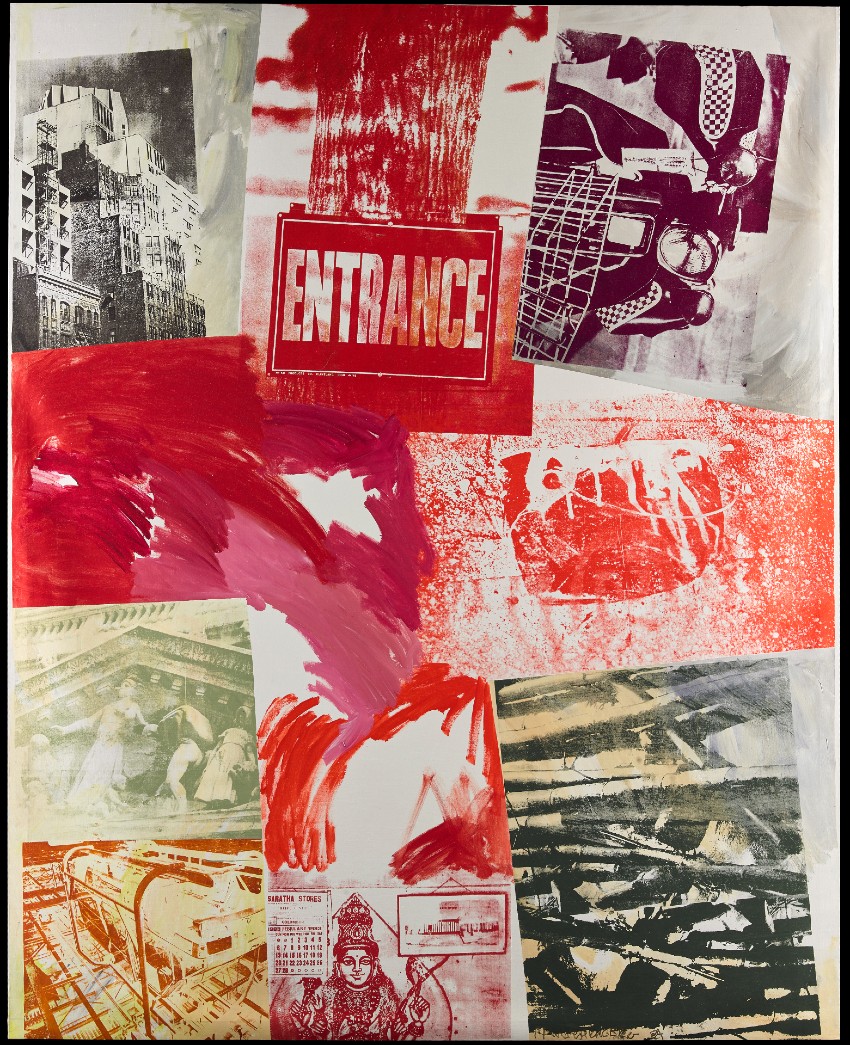 From the banal to the exceptional, the metamorphosis at the heart of Soto’s work.

Venezuelan painter and sculptor Soto was one of the pillars of kinetic art. The study of space and visual perception lay at the heart of his artistic process. In 1974, Renault offered Soto a chance to put his ideas to good use on the company’s sites. To this day, the Design Centre still radiates Soto's work today. 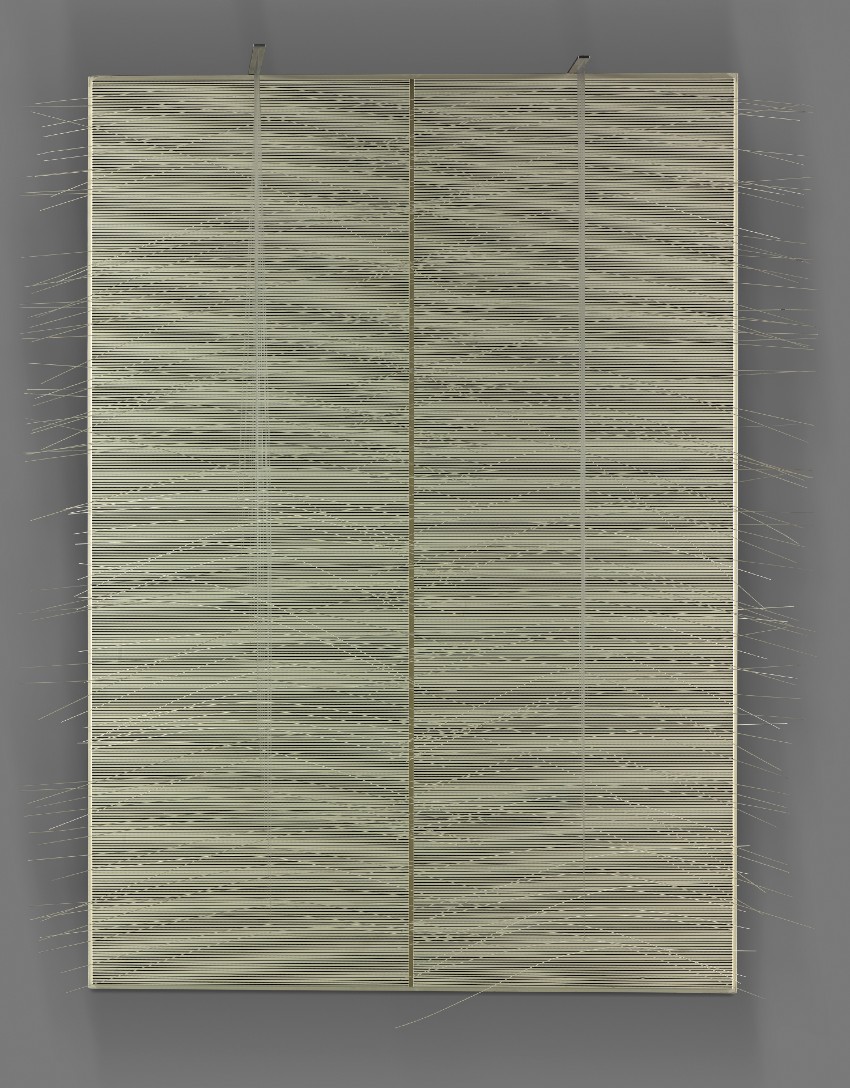 My task is to counterbalance chaos.

The iconic Swiss artist in the New Realists movement, Jean Tinguely is famed throughout the world for gigantic machines created from found objects. A poetic assault that cocks a snook at industrial perfection. As a fan of the mechanical and F1, and an engineer to boot, the collaboration between Tinguely and Renault just had to be. And how prolific it was! The work Requiem pour une feuille morte (Requiem for a dead leaf) was acquired on behalf of the future Renault Foundation. 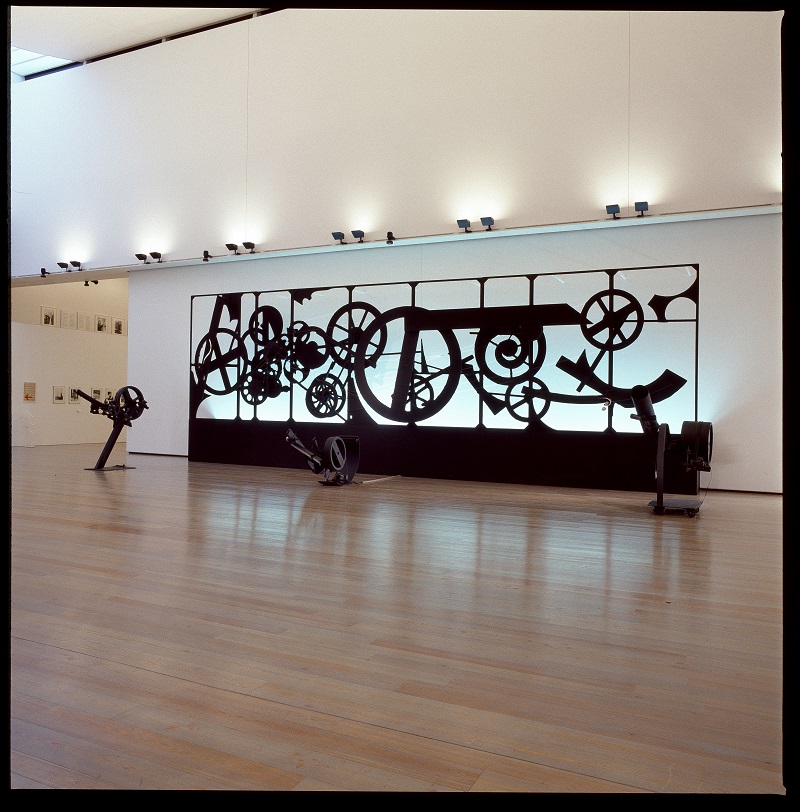 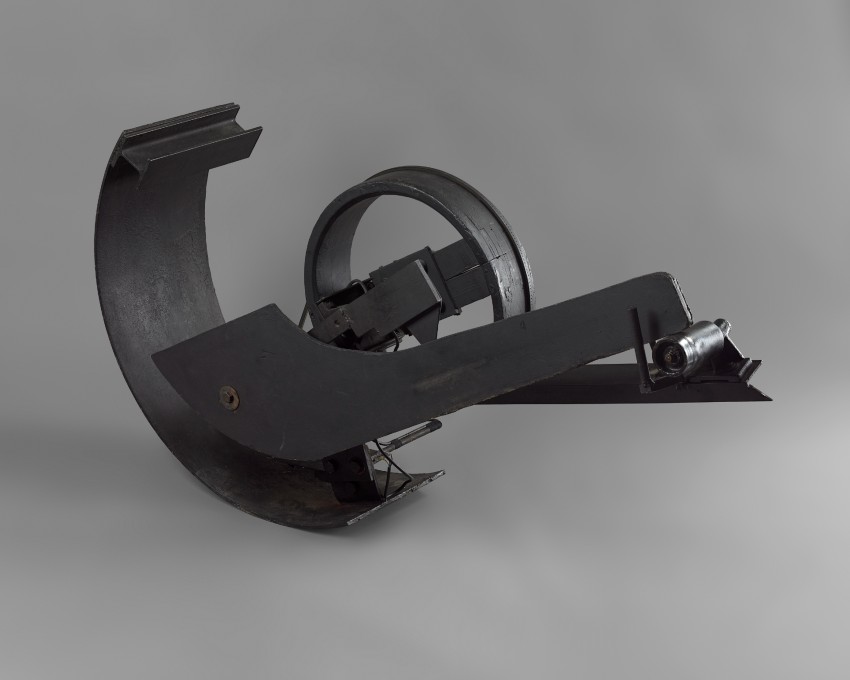 Get out of the gallery, speak to the general public.

A native of Hungary who became a French citizen, Vasarely was the painter and visual artist who founded Op Art. Fascinated by the symbolism of motorways, that “happy marriage of natural and artificial landscapes”, and convinced of art’s social significance, the artist worked closely with the company’s paint laboratory. He created some thirty signs using enamelled steel that would be installed at the sides of motorways. The collaboration didn’t stop there. In 1972, Pierre Dreyfus, the then CEO of Renault, brought Vasarely in to create the new logo for the brand. The clean, dynamic, angular lines of his logo would be used for the next twenty years. The current design, with its New Wave modernity, is an obvious nod in his direction. 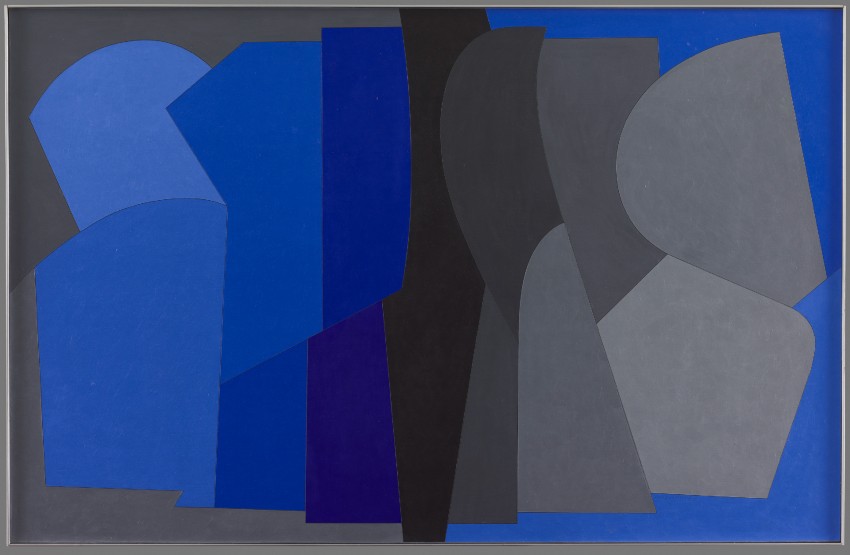 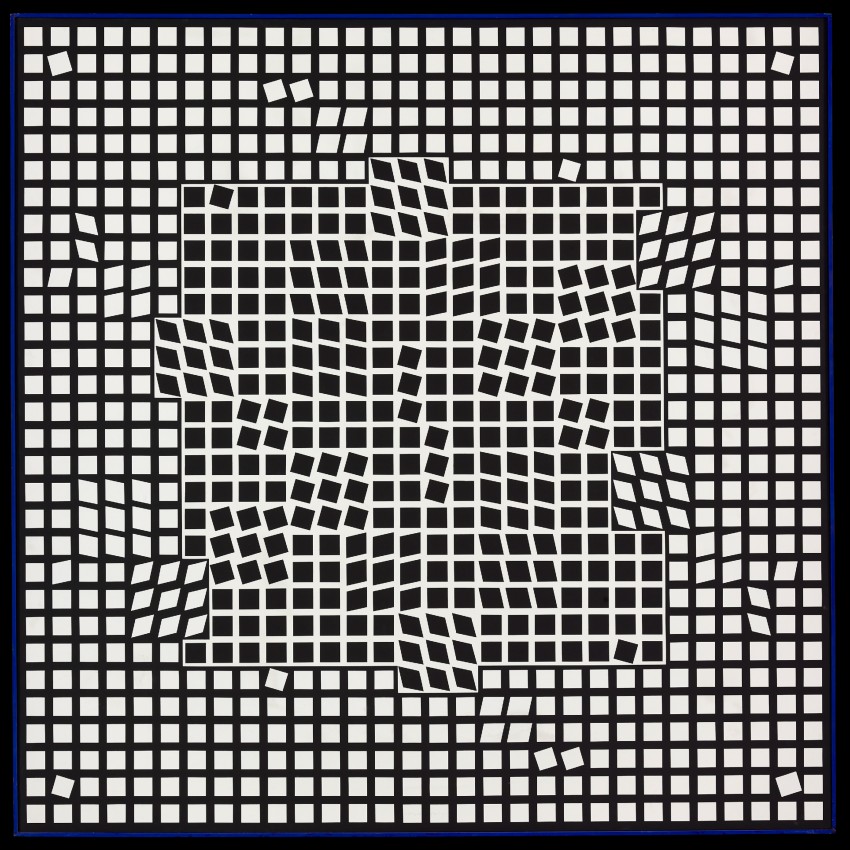 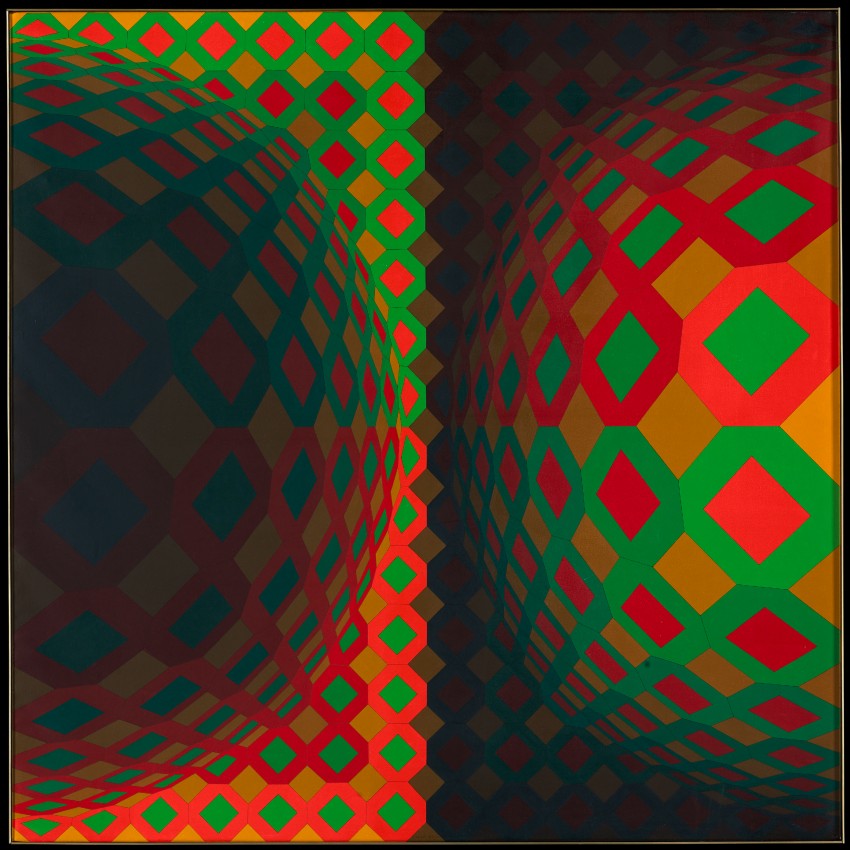 The work of contemporary painter Heidi Wood draws on themes related to sociology, urban design and heritage. She focuses especially on mapping urban landscapes, drawing attention to areas of our cities that are often forgotten and to city-dweller fictions, such as the inner city and industrial parks. Heidi Wood’s works take many forms. Not just drawings, photographs and paintings, but also road signs, characterised by their sharp contrasts. With the collaboration of the Renault Art Collection, Heidi Wood has created a series of 15 signs, entitled Urban Renewal, using paint taken directly from the Renault range. 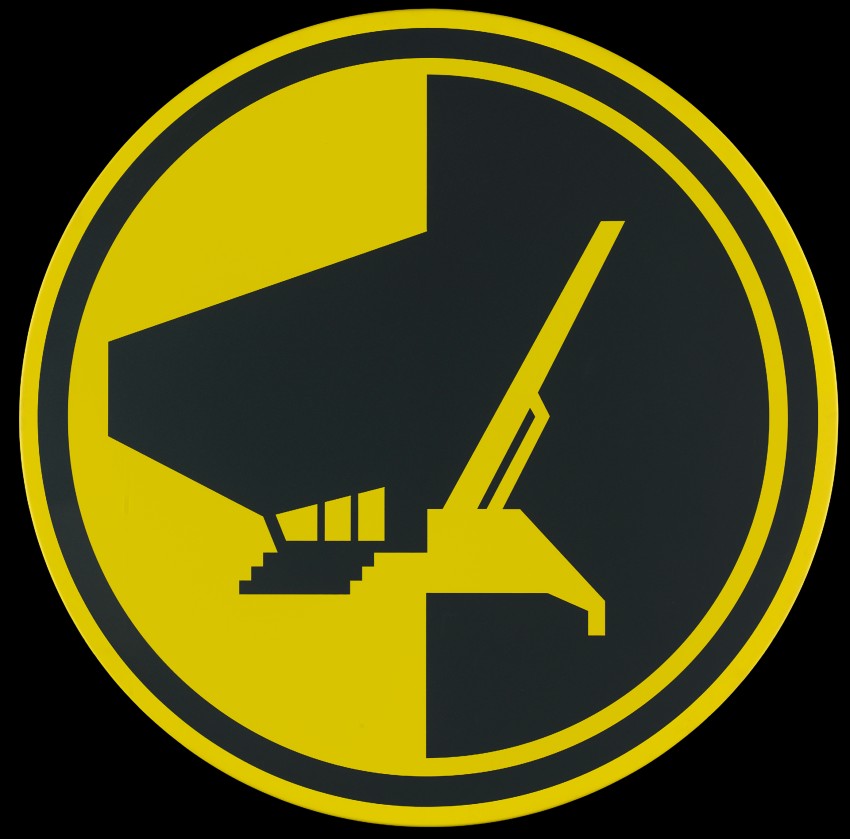 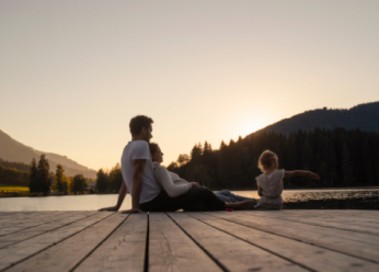 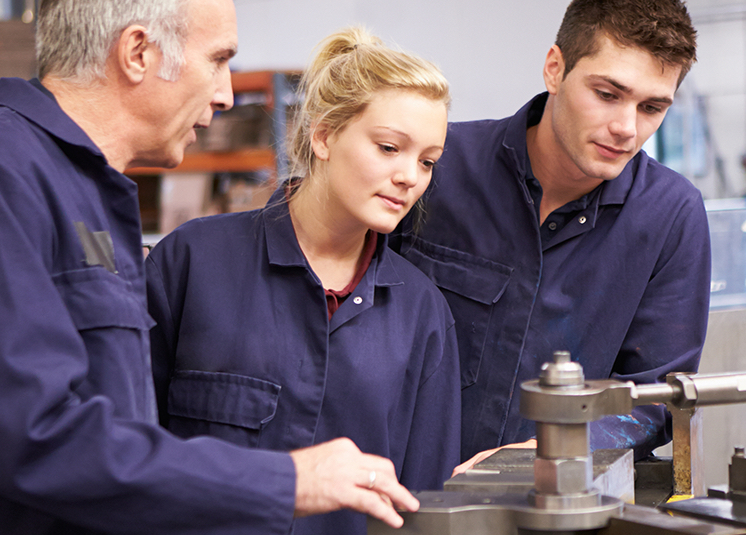 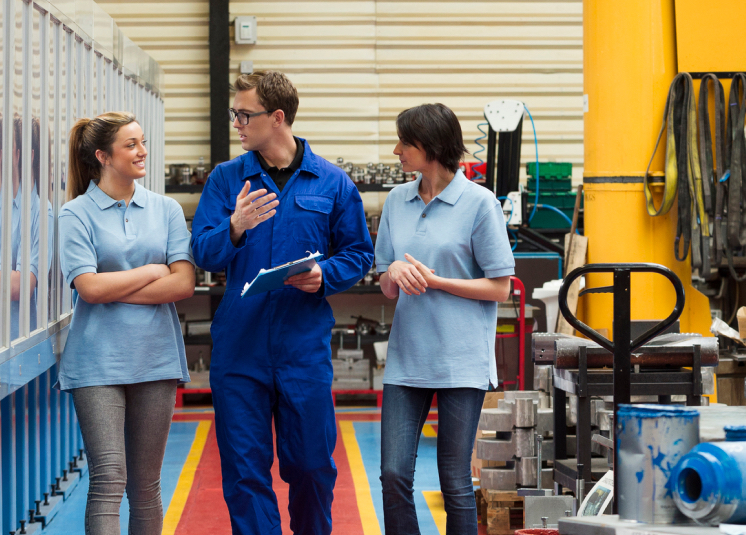