eRallye 2016 : Another electric podium for Renault 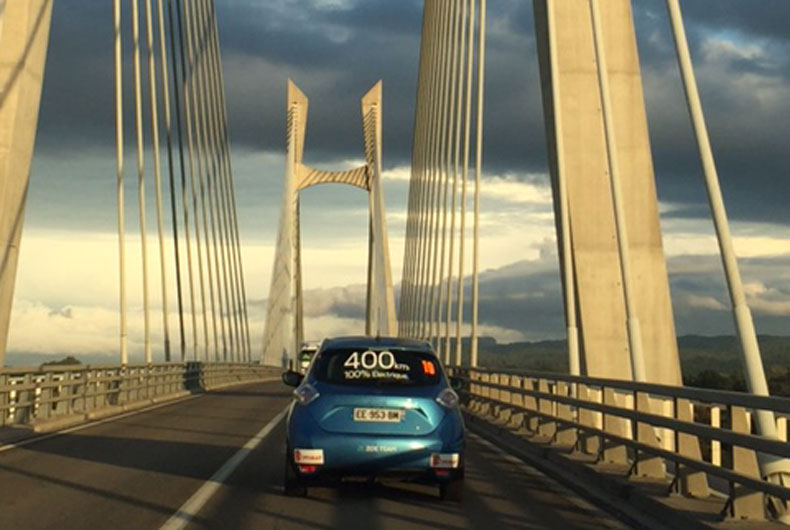 rallye ze zoe
OK, so it’s not the same podium step as the one Sébastien Buemi climbed to after winning the Hong Kong ePrix last week in the opening race of the third FIA Formula E championship season. There again, there was not one but two Renault ZOEs on the podium for the Monte Carlo eRally, another event on the FIA calendar. Ourselves, well we finished third. By Alex Stricher, AutoCult
by Renault Group

As far as we’re concerned (that’s Alexandre Stricher from AUTOcult.fr and Michael Torregrossa from Automobile-Propre.com), it’s been an amazing adventure for us to run in ZE ZOE TEAM, and we’ve given it our very best from the outset. Last year was the first time we’d run in a regularity rally, so we had a lot to learn, a great deal of information to digest. At the 2015 Monte Carlo Zero-Emission No-Noise Rally, our main aim was to learn as much as possible from the two other Renault ZOE teams (Greg and Yves Munier in one car and Pascal and Aurore Ferry in the other), former winners of the event, and finish ahead of the other journalist-manned car in the group. With a lot of help from our friends, we ended up alongside them in what would be our first podium position in a regularity rally. And to cap it all we actually topped the consumption ranking.

Though we didn’t exactly have a specific objective in mind, this year we definitely were intent on doing even better. As part of ZE ZOE TEAM we wanted to stick as close as possible to the heels of our teammates, the leading figures in this discipline. Sure, we were dreaming of a second podium position at the outcome of the 2016 Monte Carlo eRally. More realistically, given the much stiffer competition, we’d settle for a top-ten ranking. And we’d be on hand to help the team on instrument recalibration or whatever.

After a flawless score in the first trial, things went downhill fast. A regularity rally is a very particular motor sport indeed. At first sight it doesn’t sound that difficult to drive at precisely 48.8 km/h. But forget cruise control: pacing needs tight manual control at every instant. And distances have to be synced with the official tracker.

Last year we opted to stick strictly to the inside lane. In a regularity rally the roads are open to regular traffic; you do have to factor in other road users. Looking at the results it became apparent that the ideal trajectory should be more rally-like. By avoiding straight-line cuts you cover hundreds of metres more on a section of thirty kilometres or so. At an average of 48.8 km/h that means valuable seconds and the attendant penalty points at each checkpoint.

On analysing all the figures in our possession after the second stage we found we were driving almost exactly 0.6% slower that we’d need for achieving a flawless score. So we’d need to devise new methods before tackling the last night along the Turini stage.

Given the fairly low average speeds set, for dry-road and low-risk conditions, we decided to hike up our average speed by a few tenths of a km/h. We’d need to analyse the figures at each checkpoint, and our calculations were apparently not accurate enough for us to earn zero points.

Though the average speeds were set on the low side for the regularity sections, the time allotted for the last stage proved very tight. We only started realizing this when we got to Sospel. With three hours to get from Monaco up to the Turini pass and back down, plus the compulsory halts at each regularity section entry point, and a long stretch under roadworks, we’d need to get a move on. We made the mistake of waiting for our teammates Gro Flaaten and Adriana Karembeu at the start of regularity section 4, and we’d never actually be able to make up the time lost.

After the last trial we decided to take the downhill run at a smarter pace. Though Renault ZOE is hardly a sportscar we did sort of imagine ourselves at the wheel of a Clio RS 200 EDC Trophy. And ZOE is an absolute delight along winding mountain roads. The engine responds instantly and powerfully to your every demand, making the experience a real pleasure, and ensuring you get your 90 km/h between hairpins.

Just before Menton, I queried my co-pilot on what would prove a crucial issue. Should we follow the roadbook to the letter, or take the motorway to shrink the time lag. We ended up opting for the coast road. That meant being stuck at 50 km/h, to avoid any risk of penalties for excess speed, reported by the GPS module fitted in our ZOE by the rally organization. And the gigantic humpbacks didn’t help either. So we arrived 20 minutes late, which cost us the considerable frustration of 1,200 penalty points.

But as it turned out, it was Michael’s instinct on following the official roadbook that earned us our podium position. Because of the very tight timing, most of our rivals took the temping motorway option to finish faster. But that brought them the stiffer penalty of 1,800 points.

We’d have been happy finishing in the top ten, so we were understandably over the moon with our podium placing! Thanks a million to ZE ZOE TEAM for trusting us with this exciting opportunity. Thanks to Greg and Yves Munier for their hard work in helping us get such good driving conditions. Sympathies to Pascal and Aurore Ferry, who would have been on the podium had it not been for a puncture on the very last section, prone to falling rocks. And congratulations to Gro Flatten and Adriana Karembeun, who managed to outperform us on several occasions during this, their maiden outing in this motor sport discipline.

Podium glory aside, for us the most significant finding from this 2016 Monte Carlo eRally was that despite the rather peculiar driving conditions specific to a regularity rally, we enjoyed a travel range of more than 300 kilometres with Renault ZOE ZE 40. This fact alone raised many an eyebrow among the people we met along the way. As someone said: “Really? Well I’m getting one myself then!”

Next objective: drive more than 400 kilometres on the open road, to outdo the NEDC cycle figure!