Renault 5, Supercar of the seventies and eighties 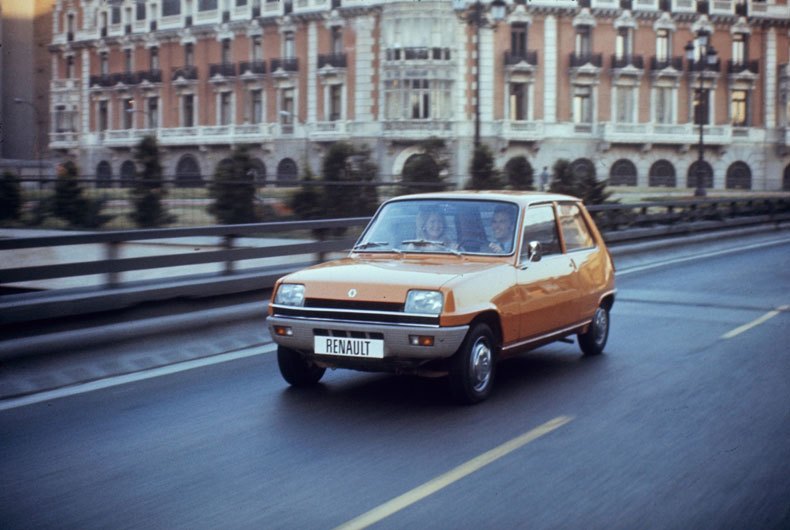 Renault 5
Up to the early seventies, the French market for small cars was pretty much split between the Renault 4 and the 2CV from Citroën. In 1967, Pierre Dreyfus (Renault boss from 1955 to 1975) asked his engineers to come up with a small car addressing the broadest possible spectrum of the population. The mission was expressed in terms resembling an incantation. The new car should be a“voiture à vivre”: “a car for all seasons, for holidays and for work, for weekdays and for weekends, for town and for country”. When it appeared in 1972, the Renault 5 met these high expectations, proving hugely successful with its innovative design and a sense of practicality unheard of at the time.
by Renault Group

So small yet so innovative The project was launched in 1967 under the codename 122. Appeal would be maximized by taking an offbeat, slightly unconventional, design approach. Obviously, the car would have to be small, versatile, and pleasing to the eye.
The final design was very close to the initial sketches produced by Michel Boué. The public would find the R5 cute in the extreme, yet undeniably elegant and ingenious.

The 122 was originally going to be called the Renault 2. But because it was considered so radically far ahead of everything that had gone before, the marketing people decided to jump straight to he number 5. The R5 would carry in much of the proven technology introduced on the Renault 4 and Renault 6, with front-wheel drive and a choice between a 782 cc engine rated at 33.5 bhp for the L version and a 956 cc unit developing 44 bhp for the TL. The L would be fitted with drum brakes and the TL with discs at the front, giving the bite needed in view of the more powerful engine.
Perhaps the most immediately visible innovation on the Renault 5 was the bumper design. The reinforced polyester bumpers, developed in partnership with Rhône-Poulenc, would resist impacts up to 7 km/h. And these polyester pre-impregnated fibreglass units fit in perfectly with the overall styling. True to its revolutionary spirit, the Renault 5 would also herald in a new approach to advertising, as the Publicis agency put together a very wide-reaching campaign for what it called the “Supercar”.
Renault wanted to emphasize the image of a popular, friendly car, appealing primarily to a younger population, with a high proportion of women drivers, in urban and rural environments.
The campaign had the car introducing itself, in what would become a highly memorable slogan: “Hi! I'm Renault 5. But in town and on the open road, people call me Supercar”. The visuals carried through the personalization process by depicting the car with eyes in the place of the headlamps and a smiling mouth in the place of the licence plate. Ads appeared on the television, on 6,500 bus shelters nationwide, on 1,200 billboards, and in two 45-second cartoons —“town” and “country”— in 1,750 cinemas.
By having the car speak for itself, as it were, the campaign brought the R5 much closer to its intended audience. And it's true that the “humanized” Renault 5 would enjoy a very favourable reception from the press and the population at large.

We should also point out that the Renault 5 was Renault's first three-door model, and would overcome the French public's previous reticence toward this format. Twenty-one years on we'd see a fabulous rerun of the Renault 5 success story, when Twingo hit the market.

The Renault 5 became a massive commercial success from 1974 onward, taking second place on the European market behind the Fiat 127. And international star status was confirmed in 1980, with second place on the world market.
International sales in 1980 accounted for 60% of overall registrations, a remarkable performance for the time. In 1984, with sales approaching 5.5 million units, the Renault 5 finally gave way to the Super 5.